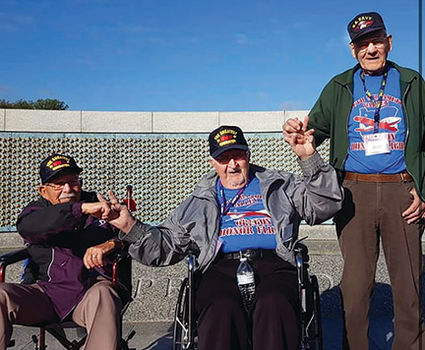 Sweet Home veterans Paul Palkki, center, and Bill Seig, right, make a stop at the World War II memorial with Bill Aldin of Corvallis, who also served in that conflict.

Bill Seig and Phil Palkki once worked together, but they hadn't seen each other in years, even though they both live in the Sweet Home area.

So when they recently reunited after a couple of decades, it was kind of a surprise. Particularly since the location was Washington, D.C.

The two, both veterans of World War II, were participating in this year's South Willamette Honor Flight Oct. 3-7, which takes former service personnel on a free flight to the nation's capitol, where they visit national landmarks and memorials and are honored for their service.