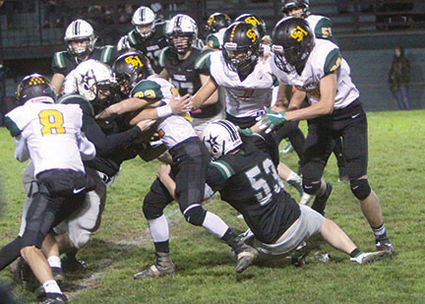 He was right – in spades.

Estacada's veer offense steamrolled the Huskies, who looked a step slow from the opening kickoff, producing 370 yards on the ground from seven different ballcarriers as they romped to a 52-6 win.

Sophomore Jake Behrman (6-0, 200) led the charge, running for 232 yards on 15 carries, and four touchdowns, three of them in the first half. Junior quarterback Isaiah Schaffer ran for two more scores.

Sweet Home finished with 179 total yards, 90 on the ground and 89 through the air as Aiden Tyler finished 10 of 40 for 88, with one interception.

"That's one of the coach's biggest fears, starting out a game like we did," Coach Dustin Nichol said. "Thirty-two points in the first quarter.

"It was not pretty. We give credit where credit's due. They came ready to play. It didn't seem like we were ready to go toe to toe with anybody that night."

The Huskies were short-handed, for sure. Senior Iakona Howerton, a two-way and special teams stalwart this season, was out, as was senior lineman Paul Glynn.

Wide receiver and defensive back Zach Luttmer played with a broken hand, though he still made key plays on both sides of the ball. But with several additional starters also out, from earlier in the season, the Huskies were thin.

"We were playing some sophomores," Nichol said. "We robbed Peter to pay Paul by moving (Travis) Thorpe from outside to inside backer. So we were trying to do a little bit of triage to get through this game, if we made it through this one to get to the next one. It just didn't work out for us.

"I thought we practiced that week really well. We had a pretty good game plan. We had people in position to make plays,but they were just not stepping up, making tackles."

"Tonight we just didn't come to play," said senior Jackson Royer, who finished with 40 yards on seven carries, just behind Tyler's team-leading 41 yards on the ground.

Royer and other players said their team lacked unified focus.

"We had guys who didn't want to be here. (Estacada) came out faster and harder than we did. They came out and put a lot of points on he board and there wasn't a lot we could do after that. They punched us in the mouth, for sure, to begin the day."

Tyler said it was a "rough" game.

The barrage started with the opening kickoff. Estacada scored on its first three possessions, the first two drives consisting of three plays.

The Huskies were able to recover three Estacada fumbles over the course of the game, the first leading to Sweet Home's longest drive of the night, 12 plays that took them 56 yards and resulted in a scoring pass from the 1-yard line from Tyler to junior Cole Baxter on the fifth play of the second quarter.

"That felt good for me, knowing that that ended up being our only points," Baxter said. "I was just glad that I got it."

Another bright spot for Sweet Home was Thorpe's punting, which kept the Rangers backed up on their end of the field to the point that their scoring slowed significantly in the second half.

Sophomore long snapper Russell Holly, who stepped in after Luttmer's injury, was perfect in getting the ball back to Thorpe, who averaged over 40 yards on seven punts.

"That was nice there. They were consistent."

Royer said the season "definitely didn't go like we thought it would."

"We seniors had high hopes for the season, but it obviously ended a little differently than that."

Tyler said he will miss playing with the seniors.

"I've grown up with these guys and this is my last season playing with them. I enjoyed it."

Nichol said Royer and Korn, who recovered a fumble of his own, then stripped an Estacada player on the next play and recovered that one, both had good nights, along with offensive tackle Sevin Carson, who was playing "with nagging injuries."

"It was just kind of unfortunate to end on that note," he said, noting that both he and his veteran players had "high expectations" coming into the season. "It's been kind of a challenging season, all the way around. It just seems like our timing was was just off a little bit this season." 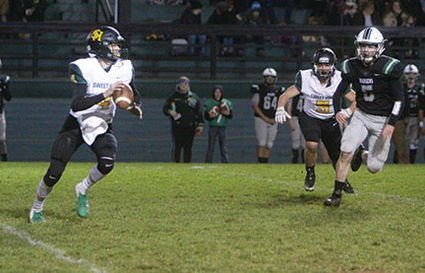 QUARTERBACK Aiden Tyler looks for an open receiver as the Huskies went to the air to try to get back into the game.