Girls run basketball record to 4-1 with win over Tillamook 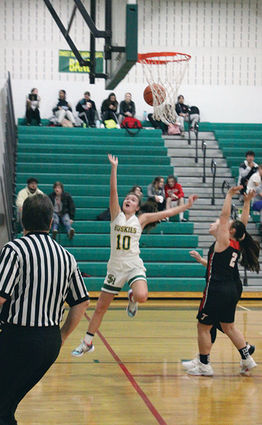 NATALIE RODGERS puts up a shot on a breakaway against Tillamook.

Sweet Home's girls basketball team started this week with its second win of the season over a fellow 4A Division team, Tillamook this time.

The Huskies beat the Cheesemakers 45-27 Monday night at home, in front of an appreciative crowd.

"I did two things I had never done before," Coach Michelle Knight said afterwards. "I called off our press and I put in the bench."

Sweet Home went 2-1 last week in the Eagle Booster Club Tournament in Harrisburg, beating 4A Division Siuslaw in the process.

The win over the Cheesmakers put the Huskies at 4-1 for the season, with an early-season ranking o...