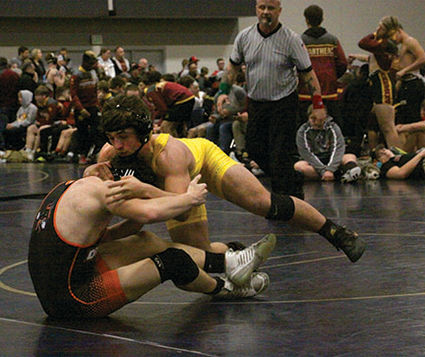 TRAVIS THORPE takes down Kadin Thorsted of Dallas on his way to a fall in a 160-pound match. FOR MORE PHOTOS, SEE OUR PHOTO GALLERY: https://www.sweethomenews.com/photos/12_04_2019

"This is a tournament we've been doing a long time," said Coach Steve Thorpe. "It's tough."

What made it tougher for the Huskies was sickness, which took out four wrestlers on Friday morning.

Then returning state champion Jackson Royer injured his ankle, which took him out of the competition.

"It's adversity," Thorpe said. "We were missing so many kids with this sickness that's hit us. It was awfully t...