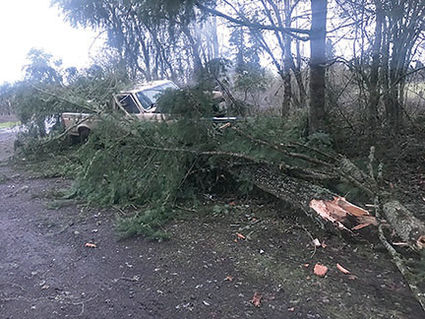 Christmas Day Crash: A driver, who told police he fell asleep, drove off Highway 228 Christmas morning in a single-vehicle crash. According to Oregon State Police, who responded at 7:44 a.m. to the scene, just east of Milepost 18, Johnny Ray Phillips, 58, of Redmond was eastbound when his Ford F25 pickup left the road and hit a tree. According to a witness, one tree was sheared off and another uprooted. According to an OSP report, Phillips did not have a license. He was arrested for misdemeanor driving while suspended or revoked, and was transported to Linn County Jail. The truck was towed at the owner's request.