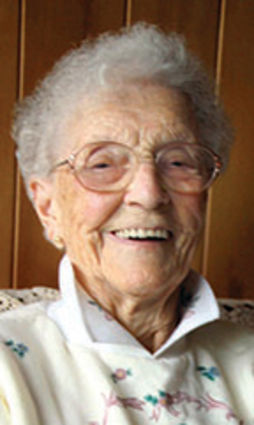 She was born May 9, 1916 in Buzzard Station, near Crabtree, to Charles and Delila (Foren) Chastain. In 1920, her mother died. Later, her father married Maude Crockett, who raised Lucille. She had one sister, Evaline, and a half-brother and half-sister, all younger than she was.

Her family moved frequently when she was young. She lived in Linn County all her life. She once told an interviewer that "I went probably to a different school every year. We moved where my dad's job was."

She graduated from eighth grade at Halsey School.

Mrs. Rapp was out on her own by the time she was 18, and spent most of her adult life as a housekeeper and providing in-home care, which she enjoyed – particularly working with children.

She married Lloyd Rapp in 1939, after meeting him while attending Holley Christian Church.

They owned a small farm in the Holley area, next door to Lloyd's bachelor twin brother Floyd. Lloyd Rapp worked in the woods until he injured himself during a logging competition.

In 1987 the Rapps moved from the farm to Sweet Home. They operated a greenhouse, growing plants commercially for 15 years.

Mrs. Rapp was a homemaker and later worked with with disabled clients at Sunshine Industries and, more recently, she was a volunteer and board member at East Linn Museum.

She volunteered at the East Linn Museum for over 20 years and Meals on Wheels in Sweet Home for a few years. She was a baptized Christian since 1936. She served in the church in a variety of programs while attending Holley Church and the Nazarene Church.

She also enjoyed crocheting and needlework, bird watching and chatting with friends and neighbors.

Earlier this year, she moved from her home in town to Wiley Creek Community, where she stayed until her death.

Mrs. Rapp is survived by her daughter, Charlotte Graham of Sweet Home and her daughter-in-law, Mira Rapp of Monroe; five grandchildren; eight great-grandchildren; and one great-great- granddaughter; and nieces and nephews.

She was preceded in death by her husband, Lloyd Rapp; son Wesley Rapp, sisters Irene Chastain and Evaline Lempke; and brother Delbert Chastain.

Memorial contributions can be made in Mrs. Rapp's name to the East Linn Museum in Sweet Home.