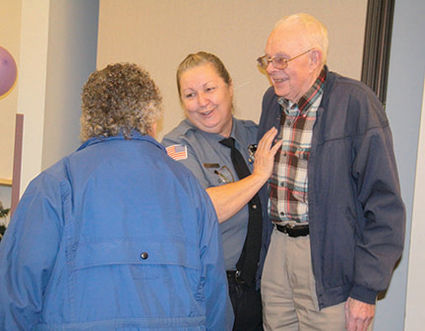 Gina Riley called it quits Monday, Dec. 30, after nearly 11 years working with the community on behalf of the Sweet Home Police Department.

Riley, 60, left a position as a trial assistant at the Linn County District Attorney's Office to go to work as the community services officer at SHPD in March 2009. She retired on Dec. 30.

"She's obviously brought a huge amount to our department," said Police Chief Jeff Lynn. "When Bob (Burford) hired her, we had few, if any, programs geared toward the community."

Everything the department is doing now, including the Cascade Jamboree fund-raising event for the canine unit, Seniors and Law Enforcement Together and Peer Court, "She has really brought these programs to life for our department," Lynn said. "She's one of those types of people that gets things done."

She has been "instrumental in pulling our department forward," he said. "It's a vital position now. We're going to fill her position as soon as we can."

Riley started out splitting her time between evidence management and her community services position. The department did not have a dedicated evidence handler after the retirement of Cmdr. Steve Young.

"There wasn't really anyone here to train me in evidence," Riley said. "It was kind of a big learning curve."

She had experience from the legal side of law enforcement with 14 years at the District Attorney's Office, she said, and she picked up on her new responsibilities quickly.

As a trial assistant, her job had been to prepare evidence and files for prosecution, she said, and that gave her an insight into handling evidence that she was able to share with Sweet Home police officers.

"I think it made a big difference in how we looked at our evidence here," Riley said, though she noted that Sweet Home always had its act together with evidence and getting needed items to the attorneys early. Sweet Home was the first Linn County department to begin sending information digitally.

As community services officer, Riley also worked with Neighborhood Watch groups and Seniors and Law Enforcement Together, and she coordinated Peer Court when the city began operating the program.

The Linn County Juvenile Department had run Peer Court, but it closed down the program in 2007, Riley said. Juvenile offenders weren't going to Peer Court in Albany, so the city started its own program, with Riley coordinating it. The city continues to operate the program.

The Neighborhood Watch program grew from three active groups to 21 today, Riley said. The city also started a Business Watch. While it has not been as active as Neighborhood Watches, police are able to disseminate information, such as warnings about counterfeit money, through the group quickly.

Riley took over the city's code enforcement program from the planning office in 2013.

"I really felt that we made good progress with code enforcement," Riley said. "It was a lot more than we anticipated."

Riley believes that publicity drove an increase in code complaints and people realized it was OK to call. Some months, she said, she had as many calls as the patrol officers.

Riley decided to retire because "I'm just ready and I can," she said. She could have retired in October, but she wanted to see the holiday programs through.

"I love this job," Riley said. "It's not a job when you come to work and get to do what you want to do and help people. I really am proud of the programs we've started."

She hopes the department will continue those programs, which range from SALT and Neighborhood to the Jim Bean Public Safety Fair, a sharing tree and Shop with a Cop.

Child Abuse Awareness month was near and dear to her heart, she said, and through the annual Polar Plunge, Sweet Home has been raising more money for the Special Olympics than any other agency in Linn County.

Through the department's Citizens Academy program, she has cultivated a base of dedicated volunteers, she said, and a bulk of them will continue to volunteer.

As she departs, she will miss her co-workers the most, Riley said.

"We're family. We're together more than we're together with our families for the most part, and I'll really miss working with the public, the residents. I'll miss the Peer Court kids too."

In Peer Court, juvenile offenders switch sides, listen to cases and determine sentences for their peers.

Riley said she has enjoyed watching participants grow and mature, and it's nice to receive a card a few years later with an invite to a college graduation.

She has enjoyed watching them turn their lives around, noting one who is planning to sign up as a Police Explorer and attend law school.

After retirement, Riley is planning some small trips with a friend, and then a trip to Italy.

"I don't know what the future brings," she said. "I'm not taking on anything new at the moment."

Known for baking cakes and teaching people the art, she plans to spend more time teaching than actually baking.

Riley grew up, started and finished school in Sweet Home. She moved back from Albany when she married Tim Riley. 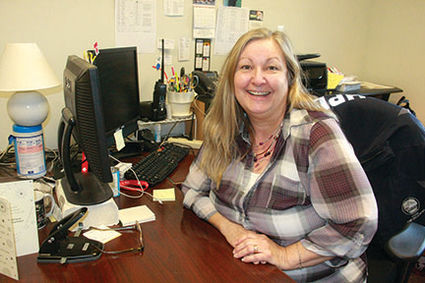 GINA RILEY sits in her office as she prepares for her retirement.

"I wanted to be closer to my Mom and to give back to my community," Riley said.

She has one daughter, Crystal Montigue, and two grandsons.

Lynn hopes to hire a new community services officer in January, he said. It's a unique position that can be a lot of fun and rewarding.

Going forward, it will be full time, he said, and the department will want the new CSO to dive into the community services functions quickly. The position also will serve as the department's liaison to the efforts to help the homeless in Sweet Home.

Anticipating another retirement, he hopes to be able to combine some roles, he said.

"It'll be hard to replace Gina, but whoever comes in will put their own stamp on it. Our main goal is to keep what she started alive, alive and flourishing."