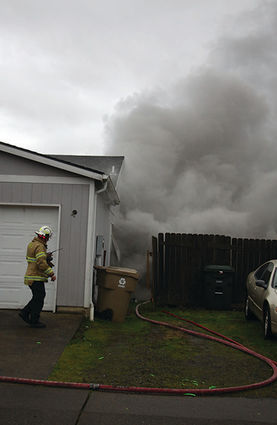 SMOKE billows from an open door after firefighters entered the house. Fire officials said the house was saved because doors were closed, limiting the fire to the room in which it started.

Sweet Home firefighters responded to the fire at 9:37 a.m. at 4591 Airport Lane, located at the intersection of Airport Lane and 46th Avenue.

Fire Chief Dave Barringer said the fire "was pretty much confined to the bedroom" in the southwest corner of the home. The rest of the home sustained smoke and water damage.

Firefighters rescued a dog from the house, Barringer said.