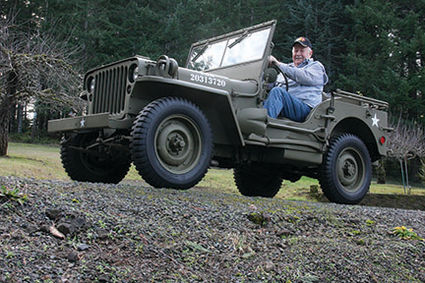 GARY BETTS sits at the wheel of his 1943 WILLYS MB Jeep.

For Gary Betts, a 1943 Willys MB Jeep he found in a quarry outside Corvallis takes him back to his early years.

With its original "Go Devil" engine, it can reach 45 mph and give a modern 30-horsepower John Deere side-by-side a run for its money off the line. The three-speed 4x4 was the military's main light wheeled transport and utility vehicle during World War II, and in recent years, Betts and his wife Mary Betts can occasionally be found riding around in the restored 1943 Jeep.

In recognition of its military origins, he displays his Jeep with a large flag in front of his Whiskey Butte home on Veterans Day and Memorial Day.

The U.S. government asked American Bantam to build a prototype utility vehicle around 1939 or 1940, Betts said, but the company couldn't produce enough units. Willys and Ford stepped in.

Willys was the primary designer, Betts said, and both companies ended up building the Willys design, producing more than 650,000 through about 1946.

The main way to tell the difference between the Willys and Ford MB is at the grill, Betts said. The Willys has a tubular cross bar welded into the frame, while Ford bolted a metal channel to the front.

"Old Henry could always figure out a way to cheat," Betts said. "The first production run, Henry got his butt in a sling."

He had Ford stamp the Ford emblem into the body panels, Betts said. The government told him, it's not Ford's, and he needed to get his name off of it. He still ended up putting the emblem on the heads of bolts around the vehicle.

The Willys Go Devil engine was better than Ford's, Betts said. "It's a four-cylinder, and it reaches a whopping 61 horsepower."

That engine and drive train in Betts' Willys Jeep are original, he said. All of the numbers match on the components. The tinware, the body panels, are after-market. Inside the tub, between the driver's and passenger's seats he has an original World War II helmet. An aftermarket combat helmet sits in the back of the rig.

The Jeep is marked with the American star, denoting that it was used in the Pacific Theater. Betts said a star with a circle marked vehicles used in Europe. Betts' carries the number 20313720. The first two numbers denote a Jeep, while the remaining digits are the production number.

Betts was exposed to the Willys Jeep growing up on his family's Whiskey Butte tree farm. After the war, they were the first utility vehicle people could buy besides the tractor for various agricultural uses.

"They were buying them as fast as possible and utilizing them," Betts said. His family was no different, and they had two of them for use harvesting Christmas trees.

"I kind of fell in love with them when I was a kid."

While he was growing up, from 8 to 20, the family Jeeps were driven everywhere.

"This particular Jeep we located in a rock pit over in Corvallis," Betts said. It didn't look very good, and it had a conveyor belt attached, probably sitting there 15 to 20 years.

Betts bought it about 10 years ago.

"It's my youth," Betts said. "I was trying to relive my youth, and I've always enjoyed them."

While there were so many of them produced, he said, "they're still a unique vehicle."

There aren't too many of them around, he said. He thinks there may be a couple each in Lebanon and Albany. He doesn't know if there are any others in Sweet Home.

John Fruetel of Peoria, who served in the motor pool during the Korean War and owns two of the Jeeps, handled 90 to 95 percent of the restoration and engine work.

Betts said he was a little nervous ordering body panels and other parts. Most of them came from the Philippines and other parts of Asia, so he would write checks and then hope to get the parts whenever the suppliers decided to ship them. It could take a month and a half to two months to receive the parts.

The more original a Jeep is, the more it's worth, Betts said. Jeeps with original engines, drive trains, tubs and tinware are worth more.

This particular vehicle has some unusual features – good and bad.

Among the bad, the dangerous, is the driver's seat position on top of a 15-gallon fuel tank, with the added bonus of a 5-gallon fuel can strapped to the back – a bomb if hit by a tracer round.

The Jeep also has interesting lighting, Betts said. While traveling in convoys, the vehicles often ran with no lights. To enable drivers to keep track of distances from other vehicles in the dark, two pairs of tiny running lights are located in back and in front. When vehicles were too close, drivers couldn't see the running lights. When following too far behind, the two small lights would appear to get farther away.

Another light shines down on the driver's side of the Jeep, allowing the driver to see directly next to the rig.

The United States didn't have a good source of rubber during the early part of the war, Betts said, so things like radiator hoses were replaced by metal pipes, with smaller pieces of rubber connecting them. Instead of foam rubber, seats were made with horsehair for a time.

The radiator fan could be turned off to avoid spraying the occupants if the Jeep needed to ford water. The wheels were designed to drive with flat tires in case they were pierced by bullets.

Betts' Jeep has a non-original rear view mirror, he said. That's so he can see his grandchildren when they're riding with him. Non-original floor mats are on the front floors to protect their bare feet during the summer from the bottom of the tub, which gets hot.

"It rides like a skateboard," Betts said. "Other than that, it's a kick. It's easy to steer, but it's a rough ride compared to these days." 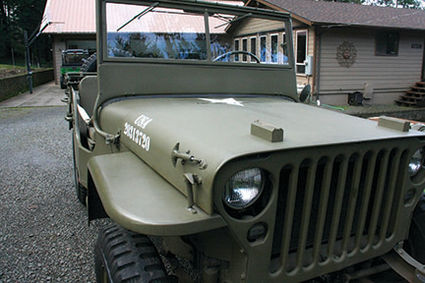 THE 1943 WILLYS MB JEEP features a star on the hood, which indicates it was used in the Pacific Theater during World War II and production number.

The vehicle tops out at 45 mph, Betts said, but it's got good power for its size. Each company involved in the Jeep's history tried to reach a maximum weight of 2,700 pounds, but that target was unreachable. He estimates his weighs in at 3,200 pounds.

Gesturing to his John Deere side-by-side, he said it can match up on acceleration.

The transmission is a three-speed with no synchros, Betts said, which means the driver must synchronize the engine and transmission before shifting.

Mostly, he takes the top off and drives it around during the summer, Betts said, but he's also showed it a couple of times.

It has a silhouette everyone recognizes, Betts said.

His 6-year-old grandson could tell what it was immediately upon seeing it for the first time: "Hey Grandpa, when did you get that military jeep?"