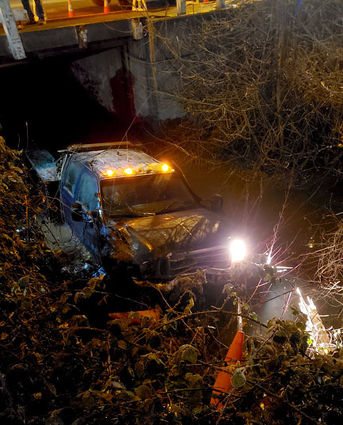 A truck sits in Ames Creek after it ran off the bridge on Long Street.

A Sweet Home man was arrested Tuesday night, Jan. 14, on suspicion of DUII and reckless driving after his truck plunged into Ames Creek near the 900 block of Long Street in Sweet Home. 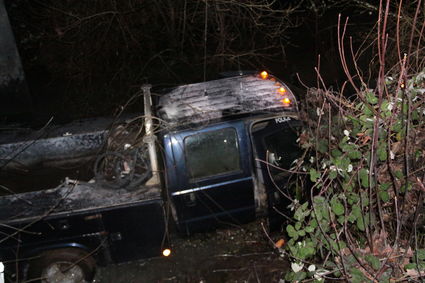 A police officer checks the truck as it sits in the creek.

According to SHPD, it received a report of the crash at 11:19 p.m. Police officers and members of the Sweet Home Fire and Ambulance District responded to the location. When officers arrived, they located the vehicle in Ames Creek, right side up. The vehicle was occupied by two adult males.

SHFAD rescuers were able to extract both males from the vehicle. Both of them, from the Sweet Home area, were transported to a local hospital with non-life-threatening injuries, police said.

The driver of the vehicle, Dustin Thomas Ferebee, 37, was arrested for DUII and Reckless Driving. He was cited and released at the hospital.

The vehicle was removed from Ames Creek by a towing company. Police said it is not believed that contaminants were released into Ames Creek. However, the Department of Environmental Quality was notified of the event.

An investigation is ongoing. Anyone with information is asked to call the Sweet Home Police Department at (541) 367-5181.