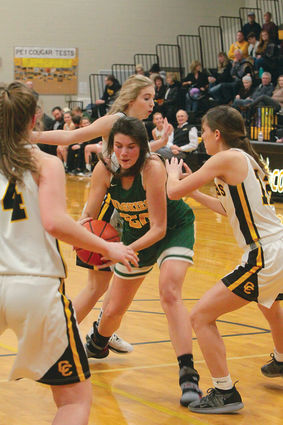 ADAIRA BURGER forces her way through the paint.

Cascade took a big early lead, 17-6 after the first quarter, but the Huskies rallied back and trailed just 27-21 at halftime. Cascade returned in the second half to dominate the game, leading 42-25 heading into the fourth quarter.

"I have four girls playing with injuries and not enough players to sub in at the end," said Coach Michelle Knight. By the fourth quarter, the Huskies were out of steam.

They shot just 15 percent during the game and turned the ball over 25 times, but Knight said th...