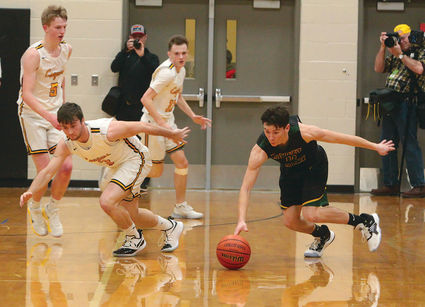 ZACH LUTTMER collects a loose ball and runs with it.

The Huskies held an early advantage, leading 13-12 after one quarter, but their game went cold in the second quarter, and Cascade had a 27-19 lead at halftime. While they pulled to within three points in the third, by the end of the quarter, the Huskies trailed 43-30.

"They're a really good team, and on the road, it's tough," said Coach Drew Emmert of the Cougars. "This is one of the games this year we came out with low energy."

And it can be hard to recover from that, he said.

Sweet Home turned the ball over 19 times, a little higher than typical while shooting was a little low at 42 percent. The Huskies had a hard time at the foul line, shooting 13-27.

Cascade rounds out the Huskies' four toughest opponents, which also includes Woodburn, Philomath and Stayton. Including Sweet Home, all but Stayton are in the top 10 in state rankings. Stayton is ranked 14th.

Every team in the Oregon West Conference is tough, Emmert said. "I think we're at those teams' level. We should be able to get them on the road. I think the guys are hungry, but we've got to do it." 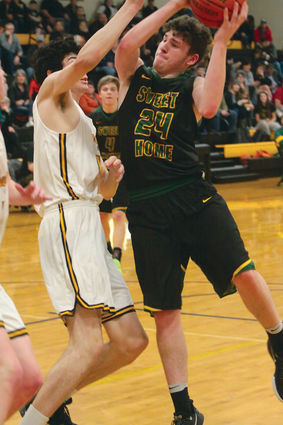 The junior varsity lost to Cascade Friday by six points, and the JV2 lost by 10.