Wrestlers get on rolls in big wins over Tillamook, Junction City 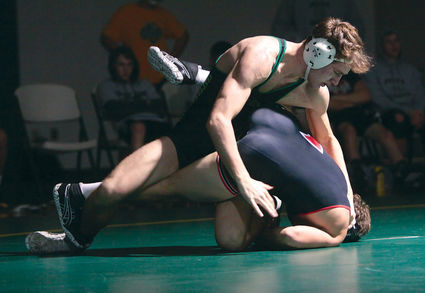 Just how good are the Sweet Home boys as the wrestling season enters its final month?

When they get on a roll, they can be formidable.

The Huskies beat the defending state champions, Tillamook, 55-15 Wednesday night, Jan. 22, in a home match, then demolished Junction City 72-9 on the road the following night.

Momentum was key in both matches, Coach Steve Thorpe said.

"We had JV kids and the girls start off very strong for us," he said of the match with the Cheesemakers. "That kind of got the ball rolling, then Jake Sieminski stepped in with a good win at 106.

"Tillamook had done at lot of damage at the (previous weekend's Oregon) Classic in the lower weights," he added ."For us to come in and lay 24 (four straight falls) on them in the first four weights, that was pretty good. When you get momentum going like that, it's good."

Though the visitors were missing Miquel Niemi, ranked No. 2 at 170 pounds, their line-up boasted five other wrestlers ranked in the top four in 4A polls.

Sweet Home won three of those matches, Jackson Royer major decisioning No. 4-ranked Baird Hagerty at 138, Nich James pinning No. 3-ranked Alex Werner at 182, and Iakona Howerton taking a 5-3 decision over No. 3-ranked Tieson O'Hagen at 195, which Thorpe described as "one of the bigger wins of the night."

"It was a huge win for Iakona to do that."

"Nick's just solid right now," Thorpe added. "He's starting to put it together. He got a late start to what he's doing, but he's starting to come on."

He noted that Royer's opponent was the result of some jiggling of Tillamook's line-up and Royer made the best of it with a big decision.

Heavyweight David McMullen got his first contested win of the season after a later start due to an injury and Jake Fanning put up a valiant fight in a 5-4 loss at 220.

"That was a close one," Thorpe said.

"It was good matchup for us. Any time you can can get two quality programs together like that, it's good for wrestling. It was good for our program, good for Tillamook's program. It was just a very, very good night. Win or lose, in duals like that great matches are happening, no matter what the score. That's what happened (Wednesday)."

Prior to the match, the Huskies and their home crowd recognized Cheesemakers Head Coach Rex Metcalf – a surprise to him – for his contributions to Oregon wrestling, following a tradition they've carried on for the past several years.

Metcalf was director of the kids wrestling division of Oregon Wrestling Association for 16 years and has coached several current Husky wrestlers on travling teams, including Travis Thorpe, Royer, James and Sieminski.

"For us to have the opportunity to tell him thank you was special for us," Steve Thorpe said.

Sweet Home wrestlers also did a shirt exchange with the visitors, another goodwill exercise.

Against Junction City, which has been viewed as a rising program in the 4A Special District 2, the Huskies again went on a rampage, starting with a pin by Sieminski at 106.

Sweet Home sophomore Kyle Watkins then lost 4-1 at 113 to the Tigers' Cameron Truesdale, a senior ranked No. 1 at 106.

The Huskies got a big fall from Ethan Spencer at 152 over Ezra Haddy and a really big win from senior Isaac Shaffer over sixth-ranked Brandon Andreson.

"Isaac just keeps coming on, working hard, fixing mistakes, doing those things he need to do to make it to the state tournament," Thorpe said. "It's a direct reflection of the amount of time and how hard he's working. That was a good win for anybody."

The Huskies will wrestle at Banks Thursday, Jan. 30, then will compete Friday and Saturday at Resers Tournament of Champions at Liberty High School in Hillsboro. 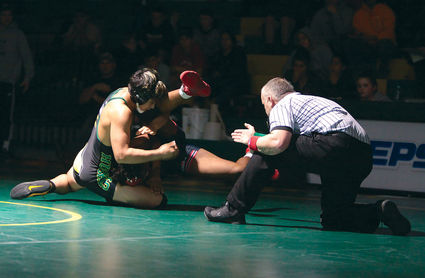