City seeks, fixes leaks that waste nearly half its water 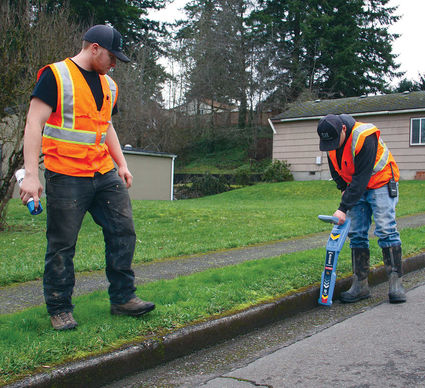 CITY MAINTENANCE worker Wes Glenn, right, locates water service connections on 12th Avenue while James Brown marks them. The lines are connected to an old 2-inch water line, which will be abandoned after connections are moved to a parallel 8-inch line.

The city has plugged around 150 water pipe leaks since mid-2018 in an effort to reduce the amount of water apparently lost from the city's water distribution system – nearly half of what it produced two years ago.

In 2018, the city was unable to account for 27.5 million cubic feet of water, more than 206 million gallons of water, it produced. According to a report given to the City Council during its regular meeting on Jan. 28, that's 45.6 percent of the water the city's Water Treatment Plant produced that year.

The city contracted with a company in late 2018 to identify leaks. The city...