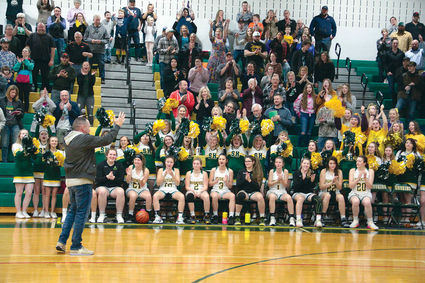 Photo by Sean C. Morgan Don Knight, announcer for Sweet Home sports, leads the Huskies, the girls basketball team and cheer team, and their fans in a chant, calling on HGTV to take over Sweet Home, between basketball games Friday against Newport. The cheer was being filmed for use in the city's effort to be chosen as a subject for HGTV's "Home Town Takeover" show.

Sweet Home leaders want to get the city on TV – in a good way.

Local videographer Brian Hutchings, with help from Barry Tevis, filmed the audience as part of a video he is making to submit to HGTV.

A few weeks ago City of Sweet Home Community and Economic Development Director Blair Larsen began looking for someone to make a video to submit. Two weeks ago, about 10 people met at City Hall twice to discuss puttin...