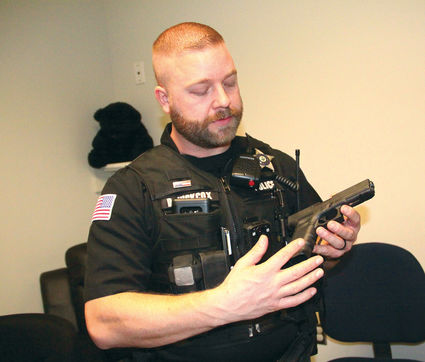 SWEET HOME POLICE officers will begin carrying Glock 9 mm pistols instead of the .40-caliberGlock, such as this one.

Hickcox said he recently took the Glock armorer course, and one of the topics discussed was the recoil of .40-caliber ammunition.

"Evidence showed that these weapons systems see more wear and tear due to the recoil overall, requiring replacing parts more often," Hickcox said. Some of the department's magazines have started to become damaged and will require replacement, noting that law enforcement agencies typically replace firearms every five to 10 years.

As a result, it's time for the department to consider keeping the current weapons system or replacing it, Hickcox said. Recently, law enforcement agencies, including the FBI, have decided to switch from .40 caliber weapons to 9 mm firearms.

"One of the main factors to consider in changing calibers is ballistics," he said, a subject that provokes heated debates among firearms enthusiasts.

The FBI conducted ballistic testing prior to switching the guns it uses, Hickcox said. The bureau requires a penetration depth of 12 to 18 inches in ballistic gel to ensure enough penetration for the projectile to reach large vital organs.

"The tests proved that current law enforcement 9mm rounds met these standards just as much as their competitors – the .40 S&W and .45 ACP," he said. There was virtually no difference among them, and surgeons have to identify the caliber based on wound tracks.

Ballistics is not the only determining factor, he said. "The purpose for law enforcement to use lethal force is to stop a threat from seriously injuring or using unlawful deadly force against others and do so as soon as possible."

The key factor is shot placement, Hickcox said. Some studies have shown that 70 to 80 percent of shots fired by law enforcement miss their intended target, the result of many factors, such as the dynamics of the incident, training and weapon recoil.

FBI testing showed that officers using a 9mm firearm were able to get more rounds on their intended target at a faster rate than those using .40-caliber or .45-caliber ammunition, Hickcox said. Training is a factor in this as well as recoil.

"A 9mm firearm will have less recoil than a .40 S&W or a .45 ACP firearm," he said. "This allows a shooter to control the firearm more efficiently, allowing them to get their sights back on the target quicker."

That allows a "faster shot stream and more rounds on target," he said.

The department's .40-caliber magazines carry up to 15 rounds, while the 9 mm Glock 17 magazines hold up to 17 rounds.

That allows officers more ammunition during a shooting incident, he said.

With a trade-in deal, the new firearms will cost a total of $3,116, and new holsters will cost an estimated total of $1,840, Hickcox said.

Department policy allows officers to carry their own approved firearms, Hickcox said, and those who still want to carry .40-caliber firearms will be able to. He believes one officer will continue using .40-caliber.

The department has been using up its stores of ammunition, Hickcox said, but the department will be able to sell its remaining ammunition to another agency.