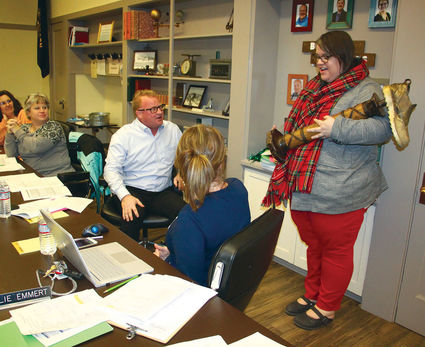 SWEET HOME JUNIOR HIGH Principal Colleen Henry accepts congratulations from Supt. Tom Yahraes, left, and School Board Secretary Julie Emmert, center, after receiving the Golden Shoe award on behalf of her school, which recorded the best attendance in the district in January.

So, what does it take to get a 13-year-old out of bed and off to school – every stinking morning?

Whatever it is, Sweet Home Junior High has apparently gotten a handle on it.

Sweet Home Junior High's attendance rate for January was 92.97 percent, ahead of Foster at 92.69 percent and Hawthorne at 92.65 percent.

The high school had an attendance rate of 86.45 percent in January.

The Golden Shoe is presented each month during the r...