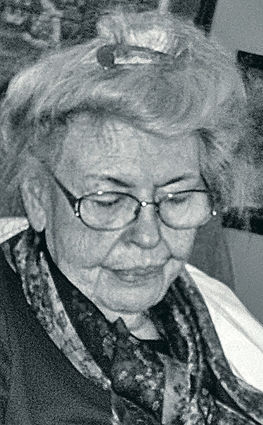 She was born July 27, 1932 to Claude and Sadie (Hommy) Taylor in Stony Plain, Alberta, Canada, and was raised in Hythe, Alberta.

After World War II, the family moved to Everett, Wash., where Beth graduated from high school.

She married Otis King in Anchorage, Alaska in 1953. Beth worked as a secretary and later obtained a degree in Food Service Hospitality. She worked in hotel catering for 19 years. She remained in Alaska until 2007, when she and Oty moved to Holley, where she died.

Beth leaves behind Oty, her beloved husband of 67 years; her children, Lori, and Ron and his wife Ruthanne; and much-loved grandchildren Cara, Sarah, and Lara.

She also leaves behind Deanne Swenson who she regarded as a daughter and Deanne’s children Sonya Tesky and Annette Mocabee, whom Beth and Oty helped raise as if they were their own. She leaves behind cousins, nieces, nephews and many friends.

Special thanks to Claire Henthorne for cheerily spending many hours with her in her final months.