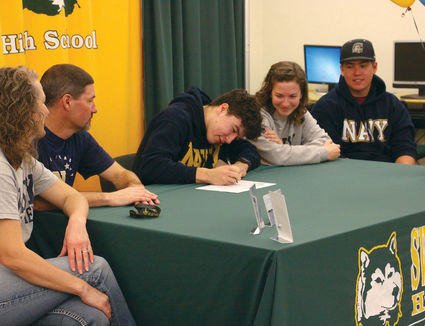 CASEY TOW signs a letter of intent to attend the U.S. Naval Academy, where he plans to compete in track and field multi-events. He's surrounded by family members, from left, his parents Michelle and Dan Tow, sister Ally and brother Justin.

The past year has been a bit of a whirlwind for Sweet Home High School senior Casey Tow, and signing a letter of intent to compete in track for the U.S. Naval Academy last week was just one more chapter in a story that's gotten more dramatic as it progresses.

After finishing second in the 400 meters at the state track meet last May, Tow decided to give the decathlon at try and wound up winning the USATF Junior Olympic regional title in that event, then went on to place third in the Junior Olympic nationals three weeks later.

"It's been quite a journey," Tow acknowledged as he prepared to...