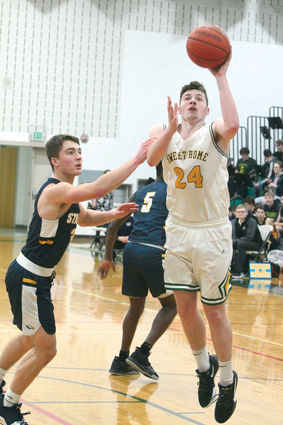 Sweet Home held off a late rally by Stayton to win 59-53 at home Feb. 11 in boys basketball.

At this point, the Huskies have likely secured a play-in slot, said Coach Drew Emmert. Winning out the next games won't let the Huskies place first or second, but it'll give them a higher ranking in seeding the play-in round.

The Huskies advanced their record to 4-5, while Stayton beat Woodburn Friday evening to improve its record to 5-5. Stayton is in fourth place in the Oregon West Conference and ranked 11th in the state. Sweet Home is half a game behind Stayton and ranked ninth in the state.

Tenth-ranked Cascade, which was leading the Oregon West, lost games last week to Philomath and Newport, falling to third place with a 6-3 record. Philomath, 8-2, leads the Oregon West and is ranked third, while Woodburn, 7-2, is in second place and ranked fourth.

Against Stayton last week, "we pretty much got a lead early and kept it to the end," Emmert said. That's in contrast to the last time the two teams met. Sweet Home held a lead most of the way in that game, but the Eagles rallied to win in late in the game.

The Huskies scratched out a 13-12 league in the first quarter and then 31-26 at halftime. Neither team won the third quarter, and Sweet Home stayed ahead, 43-38. Late in the fourth, the Huskies held a 13-point lead, 57-44, but Stayton's Logan Classen dropped multiple threes and went to the foul line late game to close the gap.

"They're a good team," Emmert said. "We never could quite pull away. They're tough. We played really good defense."

Sweet Home's press has been consistently good all season, Emmert said, but that hasn't been the case with its half-court defense. In the last few games, that has changed, and the Huskies have been playing really well in the half court. 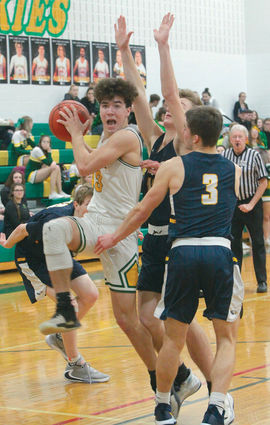 CASEY TOW takes the ball to the hoop on his way to a game high 18 points.

The Huskies were schedule to host Cascade Tuesday. They will host Sisters at 5:30 p.m. Friday and travel to Newport at 5:30 p.m. on Tuesday, Feb. 25. A play-in game will likely be at home and played Friday, Feb. 28.