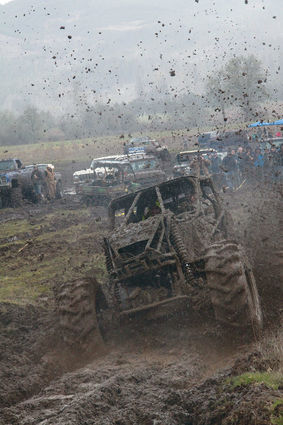 David Bechtold of Florence takes on the Progressive Mud Pit, one of two challenges at the Mudfest with a prize package. Bechtold's son, Michael Bechtold, is in the passenger seat. No one completed the second of the challenges, the Tree Hole, but Bechtold came the closest and claimed the $700 prize package. FOR ALL PHOTOS, SEE OUR PHOTO GALLERY:https://www.sweethomenews.com/photos/03_04_2020

Tucker Downs of Sweet Home didn't hesitate driving his rig straight into a big pool of water Saturday morning at the Northern Farms Mudfest, west of Holley off Highway 228.

He had a pretty good idea what would happen, and he prepared for it, recruiting Keegan Schuster of Sweet Home to rescue him.

Then he drove into it in hopes of getting across and back out. Downs got stuck, and Schuster pulled him out. A few minutes later, he was trying it again, this time with an assist from Brad Lininger of Sweet Home.

"You ain't wheeling hard enough if you aren't getting stuck," Downs said. "It's a blast."

The mud was perfect this year, he said. He was driving a 1984 Chevy body with a Craig 350 with an SM465 transmission on three-quarter ton axles.

By that standard, Hunter Coulter of Sweet Home was wheeling hard enough. He and a buddy had just been stuck for about 40 minutes in a 1994 Toyota 4Runner till someone was able to pull it out.

This was his second year at the annual event, his first driving, Coulter said. The mud "just stuck to everything. It makes it hard to get your tires to clean off and get the traction you need."

Cierra Baltezore of Sweet Home was driving for her first time after attending mud festivals at Northern Farms the previous two years with her family.

"It's slippery, but it's fun," she said, and her buddy Sherriah Thein, out for the first time, said she liked flinging around the mud.

"The mud was tacky this year," said event organizer Donnie Wagner of All or Nothing Productions, LLC. The ground was a little drier this year. Rain the night before and on Saturday kept the surface slick, but about 3 or 4 inches down, the mud was tacky. 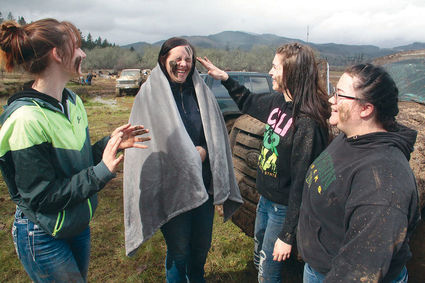 That made cleaning the rigs a bit harder, Wagner said. The event burned out two pressure washers and had to go buy another one that day. Event staff also used about 3,500 to clean the surface of Highway 228.

Wagner said his company purchased a tanker truck for the event this year. Next year, All or Nothing is looking at purchasing a street sweeper to help keep Highway 228 clean.

Overall, "it turned out great," Wagner said, and the event had a decent response to a canned food drive to benefit Sweet Home Emergency Ministries. He plans to promote that feature more heavily next year as a way "to give back to the community."

No one was able to conquer the tree hole this year, Wagner said, but David Bechtold of Florence came the closest, winning a prize package worth about $700.