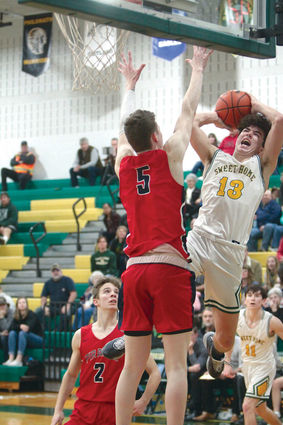 CASEY TOW shots a short jumper after stealing the ball, facing off against Phoenix's Ethan Hutsell. FOR ALL PHOTOS, SEE OUR PHOTO GALLERY: https://www.sweethomenews.com/photos/12_10_2019

Phoenix came to town with a hot hand Friday night and hit a lot of shots early, including six three-pointers, to build an insurmountable lead against their hosts in boys basketball to end the Huskies' season in their state play-in game.

Trailing 8-7 early on, Phoenix got busy and started by pulling ahead 9-8 on a shot by Logan Jenkins with a couple of minutes left on the clock. Sweet Home's offense went cold at that point, and the Pirates followed with three back-to-back threes to lead 20-8 at the end of the quarter.