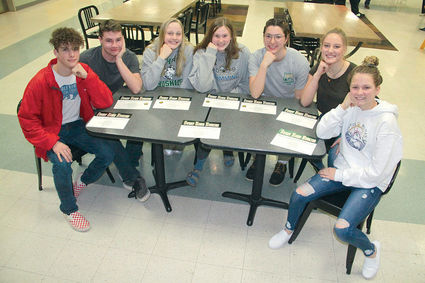 Swim Coach Doug Peargin named the four Huskies who placed in the state championship swimming finals Outstanding Swimmers of the Year for the girls swimming team at the annual awards night Thursday, Feb. 27.

The girls honorees are Chloe Tyler, Malia Hewitt and Jamie Seward at the freshman-sophomore level, and Megan Hager at the junior-senior level.

Earning the Outstanding Swimmer award for boys were Micah Wright at the freshman-sophomore level and Hunter Calderwood at the junior-senior level. Calderwood qualified for the state championships but did not place.

Torree Hawken was named the team's Most Inspirational and Isabel Sayer Most Improved.

Many of his swimmers improved dramatically throughout the season, Peargin said, but Sayer won that award based on her improvement in the 500-yard Freestyle, in which she also qualified for state.

"We were lucky enough to win districts with what we had," Peargin said during the banquet. The team needs better numbers out going forward. This year, the Huskies had just three freshmen.

That lack of depth was the reason, the Huskies didn't win state this year, Peargin said. The four girls who competed at state placed second as a team.

On paper, they appeared to be destined for third place, he said.

"With the numbers we had, it shows the incredible job they did. Every time we got on the blocks, we were ready to compete."

His team swims many more yards than a lot of the people it faces in competitions, Peargin said, and he praised his senior swimmers, Valerie Richards, Brook Womack, Annaleea Shuttlesworth, Lauren Taber, Hawken and Hager for their leadership.