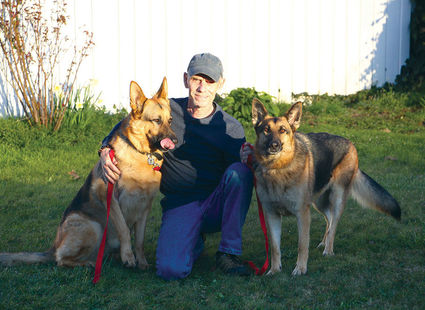 TOGETHER AGAIN: Jim Adamik holds his two German shepherds, Vorlund, left, and Nymeria Monday afternoon, March 8, a week after they went missing and he found them after several days, following an intense search.

For someone who teaches Tai Chi and Qigong, Jim Adamik was surprised to find his patience running thin last week, in the days after his two dogs went missing.

"I'm usually a calm, peaceful, get-along-with-everybody kind of guy, but I was getting very upset," Adamik said. "I thought I was close to some kind of a nervous breakdown. They mean everything to me, and I didn't realize how much until they were gone."

Adamik's German shepherds, Nymeria and Vorlund, slipped out Monday, March 2, near Pine Street and Evergreen Lane. They were found four days later, one mile away, and Adamik attributes...