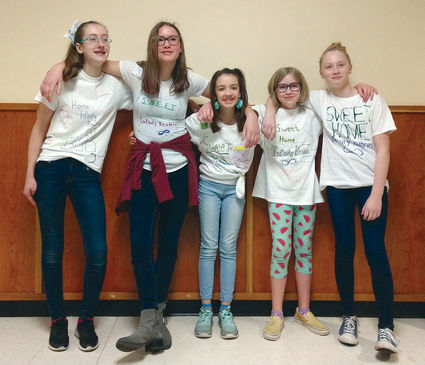 The team, composed of three sixth-graders, one seventh-grader, and one eighth-grader, made it to the Elite Eight out of an original field of 42 teams. In the competition to move on to the Final Four, the Sweet Home team lost by a narrow two points.

Team members were sixth-graders Lilly Dunn, Naomi Baarsch and Eleanor Larson, seventh-grader Beatrice Reeves, and eighth-grader Akira Blum. Only four players participate in a game, but teams are allowed a fifth person as an alternate. All five members played a minimum of three of the six competitions.

Also participating in OBOB throughout the year, but not competing in the regionals were Quinn Clark, Jazmine Jordan and Anabelle Morris.

Practices had been held once a week at the Sweet Home Library, which sponsored the team's participation in the OBOB competition. They had been meeting since November to prepare for the competition over the 16 books chosen for all junior teams to read.

The regional competition began with four round-robin contests, in which the total number of points scored determined which teams moved on. The team scores 155 points in the round-robin portion, good enough to rank them seventh heading in to the single-elimination Sweet Sixteen round.

The Sweet Home group faced Sublimity in the Sweet Sixteen, defeating them by a 33-20 score. They next faced Lacomb, a team they had faced in the round-robin action.