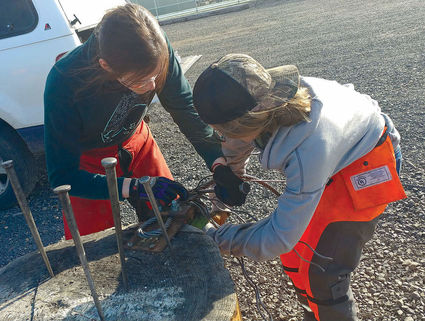 High school girls are either leaving the competitive forestry team or hanging in there a little longer to see whether the Oregon Department of Education will reverse its decision to combine boys and girls into a single team during competitive events.

The ODE's decision hinges on what the state considers the events to be. Forestry competition events are not considered a sport nor competitive but rather "career development events," which must not be segregated, based on Title IX of the The 1972 Education Amendments.

A lawyer representing the Sweet Home School District has argued that exceptions exist and this falls into one of the exceptions. School district officials intend to file their own Title IX complaint about the ODE's decision.

At Sweet Home High School, meanwhile, six girls have dropped out of the program. If things hadn't changed, natural resources teacher Blake Manley said the team would have 11 girls this year. As it stood at the end of last week, the team had five girls left.

About 16 boys will participate on the forestry competition team, Manley said. "We were looking at about 30 (total) until this, really."

Boys have dropped it because of this decision, Manley said. "It's just kind of deflating."

"I think they are taking opportunities away from girls and women," said Niki Stafford, who assisted Dustin Nichol for eight years and coached the forestry team herself for two years, prior to Manley. As a result, the girls don't want to compete. "I think they're absolutely taking away opportunities for the girls, narrowing the opportunity to place in events."

While the ODE doesn't view it as a sport, forestry competitions have value as a sport, Stafford said. "It gives the girls a lot more opportunity and room to grow. It allows them to build their confidence."

It's fun, she said, and "that's how we attracted kids."

"I don't find this amazing at all," said senior Sam Mitchell. "It ruins my opportunity for happiness."

She has had some tough times and was in a dark place before getting involved in forestry, Mitchell said. The forestry competitions helped draw her out of it, but "I don't have as much motivation to compete any more."

The decision has affected her mindset for winning the state championship in power bucking and cable splicing this spring, Mitchell said. As a career-related event, "what we do have is to try to get the girls, anybody, to get their foot in the door."

The industry doesn't lower its standards for girls, she said, but forestry gives the girls a chance to develop those skills and to feel good about themselves.

It really is a sport, she said, noting the existence of the annual Logger Olympics in Sweet HomeForesters work harder than in some other sports, Mitchell said. It's fun, and it provides hands-on training at the same time.

The competitive program goes beyond career preparation, she said. "I personally use cable splicing and the axe throw as a way to get my anger out."

It also builds teamwork and leadership skills, she said. "I've always been a follower. It's nice knowing I get to be a leader in this," supporting teammates and helping her team to get better.

"It helps me focus in my classes," Mitchell said. "You have to be focused" to compete in forestry, and that has carried over to her work in classes across the board, not just in natural resources, she said.

"I do this because I love it," Mitchell said. "This is my hobby."

She has written a letter to the ODE objecting to the decision. The ODE responded by repeating its rationale for the decision.

"We're trying to come up with a game plan to defeat this," Mitchell said. She intends to stick with it. "This is my other family. If they're hurting, I'm hurting. If this gets reversed, I'm truly happy for our girls next year, after I'm gone."

Sophomore Hailey Nunes is planning to stick with forestry this year. She will probably stick with the natural resources program, but she's not sure she'll continue to compete.

She wants to work in some field involving animals, she said, and natural resources addresses that.

"This out here, I feel it's a little bit different," Nunes said. "You don't sit down here and learn something out of a book."

The competitions help draw students to the natural resources program, she said.

The way it was, she was "actually placing," Nunes said, and she felt good about it.

There is no way she will feel that way facing a "6-something guy" in pole climbing, Nunes said. "I'm going to be scared I'm going to lose. We're smaller. We going to be a little weaker than the guys."

A few girls will be able to compete, but most won't, Nunes said. They'll miss out on a chance to stand out and be recognized.

She also has written a letter to the ODE, and she is using the issue to write an argumentative essay in her English class.

"I would like to see it changed back to the way it was," Nunes said.

"I think it's unfair," said junior Shelbey Nichol, whose father Dustin started coaching the forestry competition team at Sweet Home in the 2006-07 school year after a girl from Philomath moved to Sweet Home started the club. "I just came out and wanted to try it. Forestry's always been part of my life."

Shelbey Nichol said her sister was successful in forestry and had fun with it, which influenced her own decision to join the program.

"It gives you a different perspective on things," Nichol said of the competitions. "You can learn a lot even if you don't end up doing this (as a career).

"I would like it to go back to how it was. It would be more fun to compete."

"I think it's stupid," said sophomore Dacotah Pennington said of the ODE decision. With everything his teammate, Nichol, has been working toward, "she hears about this, it changes everything she used to think about it."

If this happened with track, said junior Becky Belcher, last year's state champion Jill in forestry, "no girls are going to want to do track."

She told The New Era a couple of weeks ago that she would drop out of the program and compete in track if this decision stands, but that final step has been difficult for her to take.

"I've worked so hard," Belcher said. "I worked the year to get that (champion). It feels like everything has been taken away from me."

Forestry competition involves a lot of physical activity, Belcher said. "I feel like it should be a sport."

The teams follow guidelines the same way as other sports, she said. "If this stays this way, no girls are going to want to join."

The girls had been lying low in hopes the ODE would reverse its decision, Belcher said, but filing a complaint of their own is on their minds now.

Two sisters, both Sweet Home alumni and champion Jills, expressed their displeasure in letters to the ODE.

"Hearing my name being called after two long and very tiring days of working my hardest and six long years of competing was the most rewarding thing I have ever accomplished, even to this day, two years later," said Callie Baker. She was among the few who started competing in the seventh grade. As she started taking home more and more ribbons, she was ecstatic; and she wanted to follow in her sister's footsteps.

"This forestry program allowed me to achieve the goals I had set for myself and gave me the opportunity to go to school on almost a full ride in scholarships. With this I have the chance to work almost anywhere, whether it be an hour from home or thousands of miles away on an oil rig in the middle of the ocean."

Baker's current field is not 100 percent associated with forestry, she said, but being able to meet standards without failure gives her many options.

"Being a girl in this area already is challenging, but once others see the talent I have, they understand why I chose this career path.

"If I hadn't started seeing success within myself in the forestry program through high school, there is no way I would have continued with it."

Combining boys and girls, the girls won't score near the same amount of points she did, Baker said. They won't find the success, and the dropout rate for girls in the program will skyrocket.

"My little sister, who is now a freshman in high school, wanted to follow in her two older sisters' footsteps and be in the forestry program but now dropped out of the program because she thinks she will have no chance at success," Baker said. She also has seen many of the young women still in the program quickly lose interest.

Kara Baker won overall Jill at state in May 2015, she said in her letter.

"How did I get here? A lot of work, blood, sweat and drive."

She started winning overall Jill at competitions her junior year, she said. Winning at Sweet Home in March 2014 "was one of the best days of my life. Finally, my hard work is paying off. I finally reached my goal to win overall Jill."

Winning at state "is one of the best feelings of my life," Baker said.

Through the job interview event, she learned how to pursue a job, she said.

"To this day, I have been complimented on every single interview of how well I can interview. It has landed my jobs that I thought I would never get."

Her forestry experience also helped her win scholarships to pay for her associate's degree. She chose a career as a certified medical assistant, and she also is a volunteer firefighter.

"I wouldn't be where I am today without the help of my high school forestry program," Baker said. 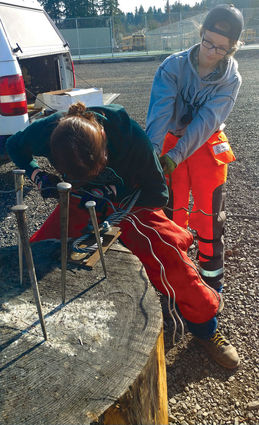 "Forestry has connected me with local employers, who helped me succeed in becoming a volunteer firefighter. Most sports end when high school does.

"Forestry has impacted my life successfully and will continue to do so as I grow, and I believe I am not the only one's life it has impacted."

Without forestry, she wouldn't have the same work ethics she does today, she said. "I was taught respect, work ethic and responsibilities."

Without Jill competitions, she would not have competed, Baker said.

"I am appalled that these changes are expected to help women but in fact, will not help women. It will destroy the confidence in young women who want to be part of a fascinating program."