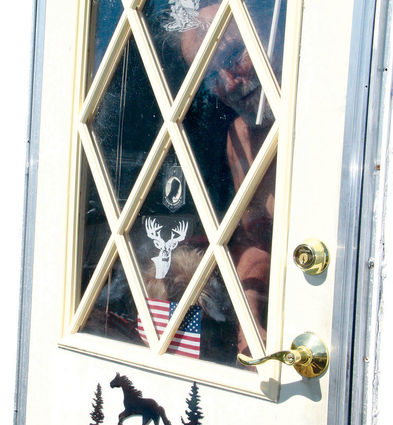 DALE JENKINS peers from inside his home during his quarantine period following a visit to the Oregon Veterans Home.

So far, Dale Jenkins hasn't shown any symptoms of COVID-19, but he's spent the last two weeks on the sidelines after a visit the Oregon Veterans' Home in Lebanon.

Jenkins, commander of the local American Legion Post, said he believes he's the first person in Sweet Home to be quarantined in connection to the spreading COVID-19 coronavirus.

Jenkins said he was through it Monday, which he found amusing in light of Gov. Kate Brown executive orders telling people to stay home.

"I happened to be at the Veterans' Home in Lebanon the day they locked them down," Jenkins said. He and his District Commander were there for their routine monthly visit to find out what the veterans need and to share their services with residents.

Jenkins said he was there on Monday, March 9, and the U.S. Centers for Disease Control told the two men they needed to quarantine themselves at home. The Oregon Health Authority publicly announced the first positive tests at the home on March 11.

"I haven't had any showing of anything," Jenkins said. "It's almost two weeks now."

He has been for a ride in the mountains – by himself and away from everyone. He's also worked in his yard.

But in general, "boring as all get out," Jenkins said. "Our cable TV is worthless."

He did work on a hunter safety presentation for a law enforcement career day event – if it happens, he said; and he has stayed busy separating iris tubers along a 60-foot flower bed at his home. He said he hasn't separated them since he planted them 12 years ago. 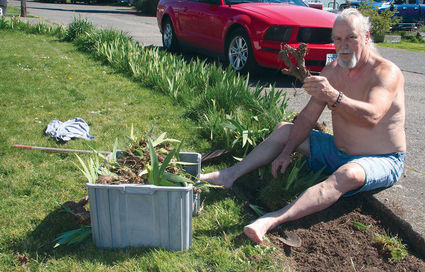 DALE JENKINS separates iris tubers, one of the activities that has kept him occupied while being quarantined at home after he visited the Oregon Veterans' Home two weeks ago.

"I'll be planting here, but I'll be trying to give away just hundreds of tubers," Jenkins said. He thought the new City Hall could use them this spring.

He also planned to get busy with his vegetable garden soon, he said. He had just put strawberries in prior to his quarantine.

He said he planned to attend a small military funeral, with fewer than 20 people, prior to the end of his quarantine, but he would keep his distance during the ceremony.

With his budget, he's been tight on food, Jenkins said, but Fair Share Gleaners brought a box of food for him, along with some cat food. He interacts with neighbors, who stand on the street while he stands on his porch, and they have brought meals to him as well.

While he left the quarantine feeling good Monday, March 30, "I'll still be quarantined because there's nothing to do out there," Jenkins said.