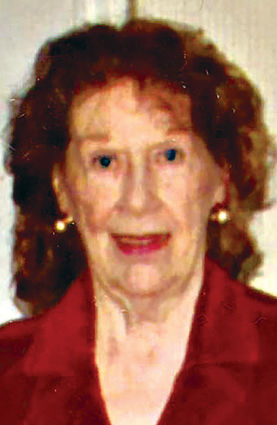 Geraldine “Gary Anne” Groshong Smith, 91, of Sweet Home, passed away March 12, 2020, at her longtime home in Holley, Oregon, as she had always planned.

She was born December 14,1928 to Andy and Mable (Talkington) Potts in Portland, Oregon. Her mother married Wayne Groshong when she was 1 1/2 years old and he proudly adopted her into his family. She was joined by sister, Yvonne, and brother, Wayne Jr.

She was bright, vivacious, and one might say a little set on getting her own way.

She held a variety of jobs until she became a volunteer and later an employee of Twin Rivers Alcohol and Drug Rehabilitation Center. This program was so successful that it was later absorbed by the county and then state.

She was the manager of the Sweet Home branch as well as a counselor at the time of her retirement in 1995. She made many life-long friends among the staff there.

She was married to Jimmy Barton and they were blessed with her only child, a son named Jay Barton. She later married John A. Smith and they were together for about 50 years. John had been a loving caregiver to her during her declining health issues.

Her true passion was her family. She first embraced Jay’s wife, Josie, and then their three children, Nicole, Wesley, and Sam.

Anyone who visited was regaled with how intelligent, talented, and good looking they were, complete with the latest photographs. When Wesley and Kaitlin had great-grandbaby, Haylen, their delight was shared by Gary and John.

Nicole’s marriage to Tre Jenkins also brought her great joy and their visit out here to see her last year brought her so much happiness and bragging rights.

She is survived by loving husband, John, son Jay Barton and his wife Josie, her three grandchildren, Nicole (Tre) Jenkins, Wesley Barton, and Sam Barton, and great-granddaughter, Haylen Barton. She also has loved nieces and nephews. She was preceded in death by parents Mable and Wayne Groshong, brother Wayne Groshong Jr., and sister and brother-in-law, Yvonne and Mike Frachiseur.

She was devoted to her family, loved by so many friends through the years, and will be missed by all who came in contact with her warm personality, helpful nature, sound advice, and wry sense of humor.

Private family services are slated. It is hoped to have a Celebration of Life service for all her other family and friends at a date to be later determined. Internment took place at Union Cemetery in Crawfordsville. Sweet Home Funeral Chapel is handling the arrangements.