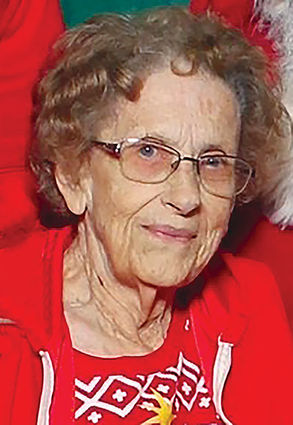 She was born July 18, 1928 in Sweet Home to Muriel E.(Reinhart) and Albin B. Nothiger. She lived all her life on the family’s farm, which was part of the original donation land claim settled by the Samuel Nothiger family.

She was the second oldest child, and always helped to look after her siblings and manage the house while her mother taught at the local school.

Mrs. Hufford graduated from Sweet Home Union High School in 1945. She was involved in several extracurricular activities, on the Honor Roll, and even managed to graduated a year early.

She married Tom Hufford, a love story going back to when she was just 5 years old when they met on a class trip to the coast chaperoned by her mother. They settled in the Nothiger family home.

Soon the two became seven, as they welcomed their children, Diane, Tommy, Cheryl, Teddy and Jan. Through the years, Mrs. Hufford made a welcoming home for family and strangers alike.

She worked as a nursing assistant at the Langmack Hospital in Sweet Home, canned fruits and vegetables at the Stayton cannery, and somehow still found time to become a cake decorator extraordinaire, making towering confections that rivaled any of those in her numerous decorating books.

Together the Huffords opened the Cedar Shack Drive-In in 1965 with the help of friends and family. Their restaurant quickly became a staple of the community, feeding tourists and, routinely, anyone who was hungry. Mrs. Hufford enjoyed taking hunting trips with her husband, baking with the grandkids, and spending time with her large family.

Above all else, she believed in the importance of community and family. She felt that everyone had the potential to make the community a better place, and practiced that all her life, through her generous and loving spirit, and through her volunteer work with the PTA, Girl Scouts, and the American Legion Auxiliary.

The Huffords were philanthropists their entire lives.

During her 91 years, Mrs. Hufford had the opportunity to travel much of the United States, parts of Canada, and Mexico, but Sweet Home was always her favorite place.

Mrs. Hufford was preceded in death by her husband of over 60 years, Tom Hufford in 2014; two of her daughters, Cheryl Adelle Hufford in 1958, and Diane (Hufford) Lucky in 2006; sisters Edith Jewell Crockett in 2009, and Janet Marilyn Spunk Von Ronk in 2018; son-in-law Marvin Wilson and granddaughter-in-law Beth Wilson in 2014.

A private graveside service was held March 24 at Gilliland Cemetery. A celebration of life is planned for the summer.