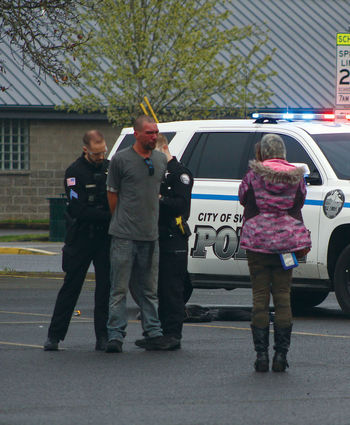 Sgt. Ryan Cummings, with Officer Brian Prather, right, takes Joshua Kealohanui Leslie, 32, into custody on a charge of third-degree theft in connection to the theft of a bottle of wine at Thriftway, 621 Main St. The theft was reported at 5:10 p.m. on Friday. Officer Prather located Leslie in the parking lot in the 1300 block of Long Street in response to a report at 5:51 p.m. on Friday that a male was being very aggressive toward a female, who seemed to be trying to get away from the male. The caller had reported the male was swinging at her and charging her like he wanted to body slam her. Sweet Home police arrested Leslie earlier in the day for second-degree criminal trespass at 1540 Main St., Safeway. Police attempted to lodge him at Linn County Jail, but the jail was unable to take him. Leslie was booked, cited and released.

Sweet Home police are taking precautions to minimize potential exposure to the COVID-19 coronavirus to remain safe and able to serve the public while also finding ways to assist residents.

Among the precautions, police are no longer handling calls for loose dogs, said Police Chief Jeff Lynn. It remains unknown how long the coronavirus can survive in dog fur, and officers must physically handle stray dogs when they lift them into their vehicles.

When the public physically goes to the department to make a report, officers are responding outside as much as possible "to give that extra social distancing," Lynn said. Preferably, they meet persons reporting crimes elsewhere.

"We'll try to keep it open as absolutely possible, as long as we can do it safely for our staff," Lynn said. The department has taken steps to minimize exposure to its limited number of dispatchers, who are already located behind a window. For example, they no longer retrieve items that are turned in by visitors. That duty falls to officers.

Officers also are citing and releasing people in the field for less serious offenses, "limiting anybody coming into our jail facility," Lynn said. Department staff is cleaning the jail area when it must be used.

Out in the public, officers have personal protection equipment, Lynn said. They'll wear gloves while on calls, and they have some form of eye protection to help prevent exposure.

While on calls, they'll interact with people outdoors as much as possible to increase social distancing and avoid potential exposure in enclosed spaces.

"We're trying to keep as healthy as possible," Lynn said, to ensure the department is able to continue functioning.

Picking up on an idea out of Forest Grove, Sweet Home police started picking up and delivering life-preserving prescriptions on March 25, Lynn said. "We brought the idea to our city's leadership, who fully supported the plan."

The program is available to anyone 65 or older inside the city limits with a pre-existing life-threatening medical condition.

To use the program, contact the Police Department at (541) 367-5181 between 8 a.m. and 4 p.m. Monday through Friday. Participants will need to provide name, address, phone number, date of birth, the requested prescription and the pharmacy's name. The resident must contact the pharmacy and order the prescription, pay for the medication over the phone, advise the pharmacy a police officer will pick up the order and have identification available when the officer delivers it.

Thus far, the department has delivered medication for one resident.

Other nontraditional service may be forthcoming.

"We're just looking at different ways to service the community's needs," Lynn said, and police staff are exploring other ideas.

Lynn said call loads held up during the first part of March. He compared statistics last week to date this year and last year, and they remain similar.

The number of total calls in the weekly log appeared smaller during the last week, but data were not available to compare. 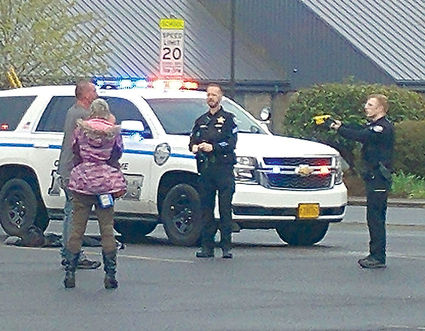 "We're concerned about an uptick in thefts at night in our business core," Lynn said. Some business owners have been concerned that they won't be able to keep an eye on their businesses while they're shut down. Officers are proactively patrolling the area to minimize that potential. One detective has put on the uniform to help fill in at night.

Officers have seen a few unauthorized entries into motor vehicles in the east end of the city and in the Avenues around 10th Avenue, Lynn said. Reports of disturbances also seem a little more common.

The department had a couple of burglary reports last week, Lynn said, and it has made arrests in both cases.

"The detectives and officers did an incredible amount of work on both of them to identify suspects and recover property," Lynn said.