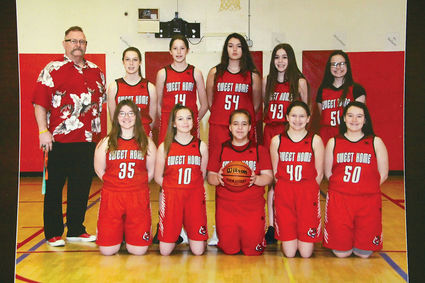 Eighth-Grade Girls Basketball Team members include, in front, from left, Kiah Cottrell, Riley Watkins, Aytra Waggoner, Keeley Baker and Madison Duncan. In the rear, from left, are Coach Steve Brown, Lydia Wright, Kallie Maas, Abby Hogan, Adisen Graber and Faith Baker.The Tigers were inexperienced this year, according to Brown, who previously coached the Sweet Home High School girls. He said he "got back into coaching to help (current SHHS Coach) Michelle (Knight) and her program." He said the Tigers spent a lot of this season working on fundamentals. They won several games and "we were close in others." Some of his team had never played basketball. "I was very proud of them, how they progressed in fundamentals. If we'd had another month, I think we would have done even better."