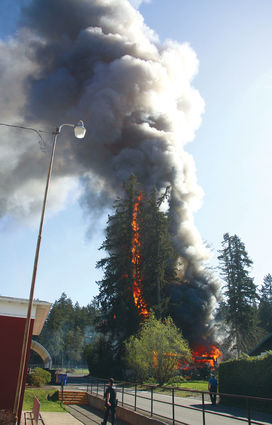 Sweet Home Fire and Ambulance District received a report at 4:10 p.m. from a caller, who said nearby trees were burning as well.

Firefighters arrived on scene to find the shop fully involved, and the school threatened by the fire. One occupant of the school escaped unharmed as the smoke and fire, driven by the wind, blew towards the school. 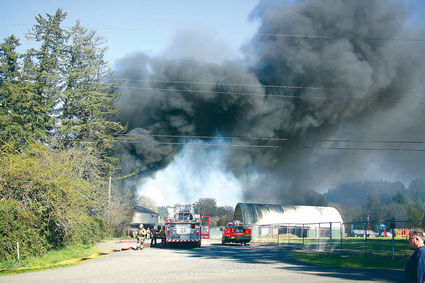 Several explosions occurred, believed to be due to multiple tires, propane and other gas tanks.  Multiple 60-foot-tall fir trees were torched by the blaze. Twenty-two Sweet Home firefighters responded.  A second alarm was requested which brought units from Lebanon, Brownsville, and Halsey. The second alarm was canceled before those units arrived when the fire was brought under control by the first wave of local firefighters.

Oregon Department of Forestry units also responded to the scene and extinguished a fire in a bark dust pile at Oak Heights, which was started by embers from the shop fire. The shop and its contents were a total loss. No other structures, including a house on the property, sustained any damage. No injuries were reported.

The cause of the fire was unintentional, and was linked to an occupant welding in an area with flammable materials nearby, SHFAD said.