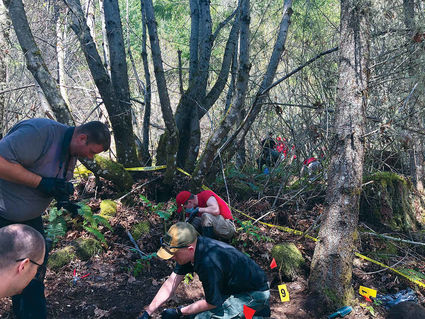 SHERIFF'S INVESTIGATORS and Linn County Search and Rescue team members search for clues after the discovery of human remains on Chandler Mountain.

County Sheriff Jim Yon said his office received a call at 4:58 p.m. Monday, April 6, regarding the discovery, in the 41000 block of Upper Calapooia Drive.

The remains were located by hikers approximately a mile from Upper Calapooia Drive in a very densely forested area on Chandler Mountain.

"They came across some bones (that) have obviously been up there awhile," Yon told The New Era.

Weyerhaeuser assisted the investigation by clearing an overgrown road to mak...