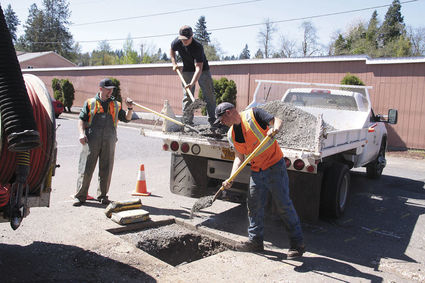 CITY WORKERS, from left, Brandon Tunnell, James Brown and Wes Glenn fill in a hole at the intersection of 9th and Nandina streets where they closed off a massive waterline leak.

City of Sweet Home workers last week found what may be the mother lode of leaks in the water distribution system, a rupture that is likely responsible for the majority of water lost from the system – almost a third of the city's daily production of treated water.

For many years, the city has tried to find something similar in the sewer system, hoping to find a storm drain or something else draining into the sewer pipes during heavy rains and overloading the Wastewater Treatment Plant. That hope has come up empty.

Instead, the the city's sewer system was actually suffering from a thousa...