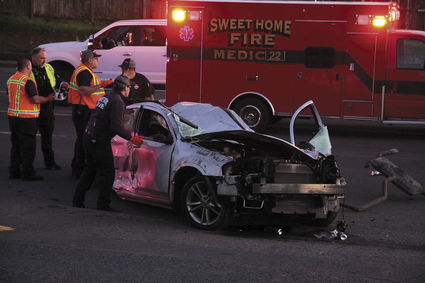 Police and emergency workers surround one of three cars involved in two crashes over a two-block stretch of Main Street, Thursday evening, April 16, from 1st Avenue to OK Country Feed and Supply, Thursday night. A Salem woman, who was driving this car, a Dodge Avenger, was pronounced dead at the scene.

A Salem woman was killed after traveling into Sweet Home at a high rate of speed and colliding with two vehicles Thursday evening.

Sherry Wheeler, 48, was deceased upon officer arrival at the scene of the crash, which included Main Street from 1st Avenue to 250 Main St., in front of OK Country Feed and Supply.

Police and medics responded to the crash at 7:53 p.m.

Sweet Home Fire and Ambulance District medics checked the occupants of the other two vehicles, said Police Chief Jeff Lynn. Neither were seriously injured, and they later chose to go to the hospital by private vehicle.