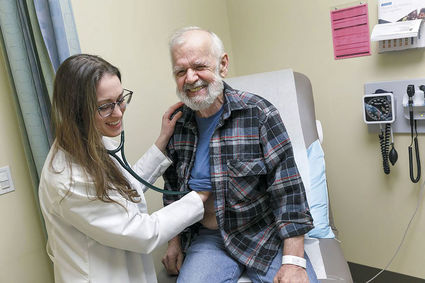 DENNIS EGGERS gets a checkup from Physician's Assistant Katherine Rajotte during a post-op visit to Oregon Health Sciences University.

In the aftermath of the ice storm of 2017, Dennis Eggers set to work cutting up and moving 20 of the cedar trees he and his wife lost that winter.

Little did he know, his effort would set into motion a series of events that would ultimately save his life – just in time.

As he cut up the trees, Eggers started feeling chest pain. His wife, Janet Eggers, said he'd never had problems with his heart before. But Dennis was entering his 70s at that point, so she wanted him to see a doctor.