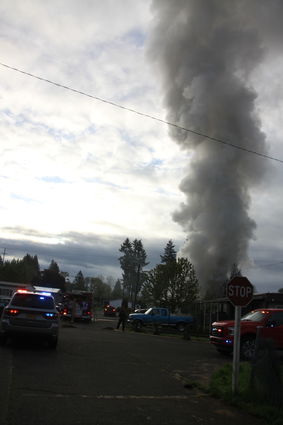 Sweet Home police have identified four people found dead in a house fire at 1530 Tamarack St. Tuesday morning, April 28. They have also confirmed that gunshot wounds were found on victims, as well as "sharp, blunt-force trauma."

Sweet Home Fire and Ambulance District and the Sweet Home Police responded just before 7 a.m. to find the manufactured home engulfed with fire upon their arrival. Upon extinguishing the flames rescue personnel entered the home where they discovered four deceased persons, Police Chief Jeff Lynn said. "When personnel entered the residence and began to investigate, they discovered trauma to the bodies that were not consistent with trauma caused by a fire," Lynn said in a statement Thursday afternoon. "Their initial examination of the scene included evidence of gunshot wounds as well as sharp, blunt force trauma. Sweet Home Police then called additional agencies for assistance in the investigation."

The deceased have been identified as John Shobert, 63; Tiffany Shobert, 42; Johnathon Shobert, 15; and Charlotte Shobert, 2. All four were residents of the home.

Autopsies were conducted by the Oregon State Medical Examiner’s office today and the causes of death have been determined. Those causes and manners of death are being withheld pending contact with family members and additional investigative work, Lynn said. Fire investigators determined that an accelerant, gasoline, was used to start the fire, he said. A firearm, the sharp, blunt force instrument, and a torch lighter were located near the bodies. "Our thoughts and prayers are with the victim's family and friends during this tragic time. Again, we ask everyone to be sensitive to the families of the victims and refrain from speculation of the circumstances," Lynn said.

The investigation is continuing.

Anyone with information associated with this event is encouraged to contact Sweet Home Police Detective Keenan Martin at 541-367-5181. Additional information will be released when it becomes available, Lynn said. "We do not anticipate another press release until Monday, May 4."