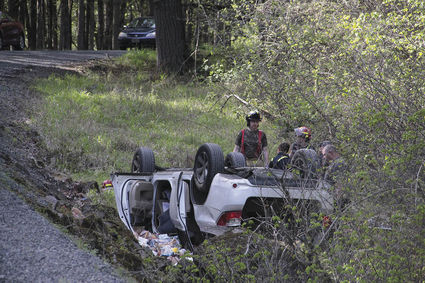 FIREFIGHTERS AND MEDICS extricate driver Earl Lowry, 83, from his overturned Toyota Highlander. They responded to the call at 4:16 p.m. Thursday, April 23, on Marks Ridge Drive, just west of Jones Road. The vehicle tumbled down the embankment after moving too close to the edge. Lowry was taken by ambulance to Samaritan Regional Medical Center. He had no passengers in the vehicle, and no citations were issued.

2:07 p.m. - Caller reported a dog wandered up to the caller's house and had been there for an hour, 12th and Osage. Dispatch was able to contact the owner and exchange information between parties to return the dog.