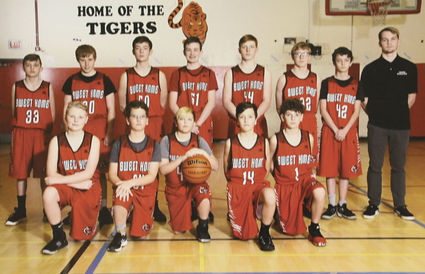 Team members include, in front, from left, Bryce Koehne, Boden Sayer, Laylend Peterson, Elijah Vincent and Sawyer Aiello. In the rear, from left, are Kasey Kast, Conner Stevens, Ricky Erickson, Gavin Gardner, Nathan Thompson, Josh Aker, Jayden Hastings and Coach Justin Carpenter. First-year Head Coach Carpenter said the Tigers were low on players, with many being new to basketball. "That being said, as the season progressed, we all got into the swing of things and there was a lot of improvement. One of the opposing coaches even mentioned to me after our second game against them that it seemed as if they were playing a completely different team from the first game. It was very much a learning year for the players and myself. Ultimately, their hard work through the season shone through and I'm proud of each one of the boys that came out."