Travis Thorpe to wrestle at SOU 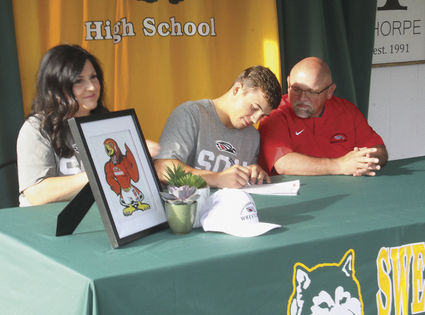 TRAVIS THORPE signs a letter of intent to compete at Southern Oregon University, flanked by his parents, Heather, left, and Steve Thorpe.

In a private ceremony held in his back yard on the evening of Tuesday, May 5, Travis Thorpe signed to wrestle for Southern Oregon University.

"He's not the first wrestler we've sent (to SOU)," his father and coach Steve Thorpe said. "In fact, I think we've been sending people to wrestle there since 2001. He continues on with quite a legacy of wrestlers that have been there."

Two coaches in the Sweet Home wrestling program, assistants Tomas Rosa and Brock Crocker, are both graduates of the Raiders program, under Coach Mike Ritchey, who announced his retirement in March after 25 seasons as t...