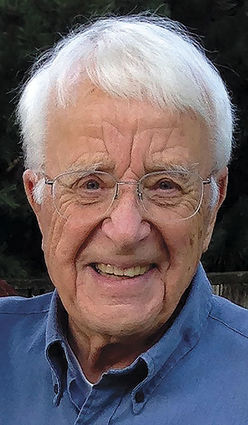 Roy had been residing at Brookside Manor in Hood River for the past six months.

Roy attended grade school and graduated from Seaside High School in 1950. He enlisted in the Air Force after high school and served in France until his discharge in May of 1954.

Upon returning home from the service, Roy met his future wife, Beverly Ann Vermeul, who was a good friend of his sister. Roy and Beverly were married Feb. 9, 1955 in Springfield. They resided in Seaside and had two children, Christy and Eric.

In 1956, Roy started working for Pacific Power & Light in Seaside and would retire with the company 33 years later. He was transferred to several different locations in Oregon, making many life-long friends along the way.

From Seaside the family moved to Enterprise for seven years, then to Rainier, where Roy became the district manager. There was a short stay in Beaverton, where he worked in downtown Portland, and the addition of a second daughter, Joan.

Roy was active in each community and always made life-long friends. He volunteered on both the Seaside and Enterprise fire departments. He was elected to both the Sweet Home and Hood River city councils. He was a longtime member of the Episcopal Church and served on Vestry and sang in the choir.

After retiring, Roy and Beverly became involved in taking History America tours that covered Native American culture and history. One of the most memorable was following the Nez Perce Trail to the Bears Paw in Montana. Elder Hostel Trips were on the agenda during those years, also.

Roy and Beverly always took pride in landscaping and gardening their houses. He could be seen regularly raking or blowing leaves, cutting grass, sweeping and general tiding up around the house. Washing and waxing his vehicles were also a point of pride for him. Both Roy and Beverly loved to watch the birds and squirrels they fed for years in their backyard.

Roy’s lifelong passion was his radio-controlled modeling, which started at a very young age.

His mother helped him build his first rubber band-powered model which he promptly wrecked against the side of the house. She told him he was on his own from then on. He thoroughly enjoyed the building of airplane models from kits, some even from scratch.

He would spend countless hours building a model, covering, and finishing them before finally getting to fly them for the first time. He enjoyed many hours of flying his entire life and made many special friends out at the “airfield,” wherever that may have been.

His joy of flying led him to buying a full-size Piper Cub airplane, which he flew after re-covering and finish it using the skills he learned in the Air Force and all the years of model building. The good friends and acquaintances he made over the years of modeling were always important to him.

His family was the most important thing in his life, and he loved them dearly.

Roy was preceded in death by his wife and soulmate of 61 years, Beverly Ann; his parents; and his daughter, Christy Davis.

The family wishes to thank the Providence Hospice of the Gorge staff for their support and kindness. They are a wonderful group of dedicated folks. Also, the staff at Brookside, who not only took care of Roy for the last six months, but also Beverly for 18 months before she passed. They are so compassionate, and the family thanks them with their deepest appreciation. “There’s a warmth and joy that will never end – between the hearts of special friends.”

The family has decided to not have a service, but rather will have a celebration of life at a later date. Contributions in Roy’s memory may be made to Providence Hospice of the Gorge (1630 Woods Court, Hood River, OR 97031) or the Oregon Cancer Foundation,www.oregoncancerfoundation.org/donate/ C/O Anderson’s Tribute Center.

Visit http://www.AndersonsTributeCenter.com to leave a note of condolence for the family.