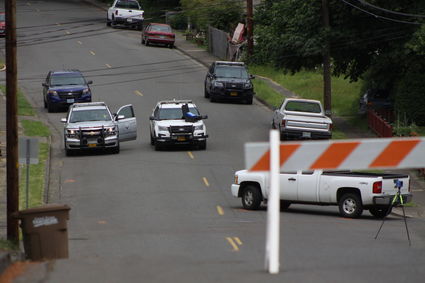 Law enforcement units and investigation equipment stand at the scene where a 2-year-old girl was killed Friday morning after being struck by a pickup truck.

A 2-year-old girl was killed when she was struck by a pickup in Sweet Home Friday morning.

According to police, at approximately 10:04 a.m. Friday, June 5, Sweet Home Police Department and the Sweet Home Fire and Ambulance District personnel responded to a vehicle vs. pedestrian crash in the area of 12th Avenue and Hawthorne Street. When emergency responders arrived, they found the child, who was transported by Sweet Home medics to the Lebanon Community Hospital, where she was pronounced deceased.

The driver of the vehicle involved in the incident is fully and willfully cooperating with the investigation, police said.

The names of those involved were not released immediately.

The incident remains under investigation. More information will be made available as the investigation progresses.