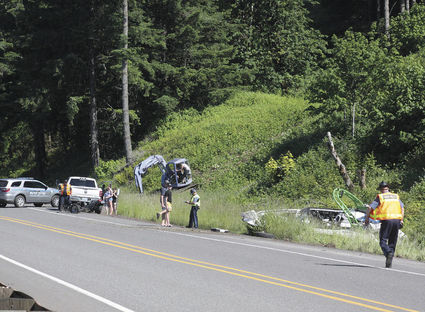 Police and firefighters responded May 28 to a crash at 3:55 p.m. near milepost 32 on Highway 20, just east of Shea Point. Justin Thomas Parker, 41, was arrested for driving under the influence, reckless driving, five counts of recklessly endangering another person and Sweet Home warrants for failure to appear on original charges of driving under the influence and second-degree criminal mischief. He was also cited for driving while suspended and driving uninsured. According to the Oregon State Police log, the Toyota SUV driven by Parker was westbound, while a pickup pulling a trailer and a boat was headed east. Parker's vehicle crossed the center line, nearly hitting the second vehicle head on and striking the boat trailer, causing it roll over after impact. The boat landed in the grass off the side of the highway. Parker's vehicle crashed into the rock embankment next to the highway, seriously injuring Parker, who was transported by Sweet Home medics to Samaritan Regional Medical Center in Corvallis. According to the police log, Parker consented to a blood draw, which indicated a blood alcohol content of .28 percent.