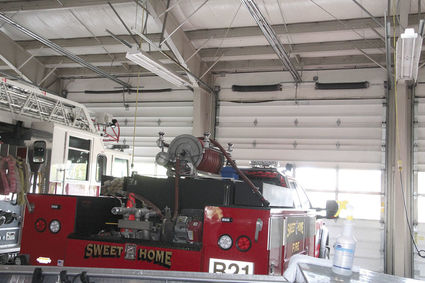 THE SPRINGS visible on the left bay door underscore the inadequacy of the original construction of the bay doors at the Fire Hall. The district has had to replace the springs on the four bay doors most frequently used, like the one on the right.

The Sweet Home Fire and Ambulance District is scheduled to wrap up its bond projects this summer.

Sweet Home voters approved a six-year $1.575 million bond levy in 2016. The bond initially had a rate of about 31 cents per $1,000 of assessed value. The rate declines as property values increase.

Last week, the district wrapped up a $93,000 remodel of the living quarters at the Fire Hall, 1099 Long St., and Fire Chief Dave Barringer said the job w...