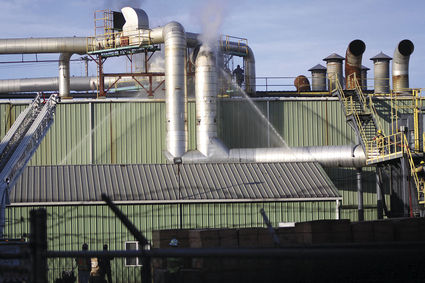 FIREFIGHTERS responded early Tuesday, June 2, to Murphy Plywood Mill in Foster, to a fire in pipe ducts that had become clogged. Julie Mayfield of the Sweet Home Fire and Ambulance District called the incident "insignificant, noting that dryer build-up is common at the mill. She said it would cost $12,000 to replace the pipes, but the fire damaged nothing else. Employees mostly had the fire under control when they called SHFAD at 6:35 a.m. and by the time firefighters arrived at 6:44 a.m., the employees had their hoses trained on the fire. Using eight apparatus and 20 personnel, Mayfield said the fire was put out quickly, but added an incident report did not state a specific length of time.

1:09 a.m. - Deputies assisted a driver getting her vehicle out of a ditch after one tire slid off the road, Foster Dam Road and North River.

12:36 a.m. - Caller reported an occupied silver sedan parked at a stop sign with lights off, 43rd and Long. Officer contacted the occupant, who said the alternator went out. The occupant was waiting on a tow truck.

1:53 a.m. - Jackalyn Arneson, 27, cited and released in field on Linn County Justice Court warrant for failure to appear on a citation and cited for driving while suspended and driving uninsured, Green River and Clark Mill.