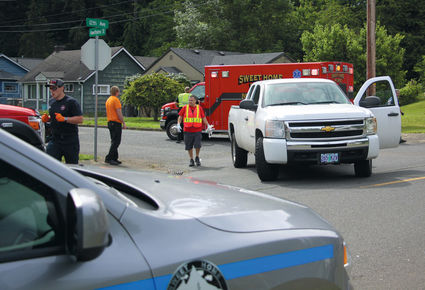 RESCUE PERSONNEL work at the scene of an accident on 12th Avenue in which a 2-year-old girl was killed Friday, June 5.

A 2-year-old girl was killed when she was struck by a pickup in Sweet Home Friday morning, June 5.

According to police, at approximately 10:04 a.m. Friday, Sweet Home Police Department and the Sweet Home Fire and Ambulance District personnel responded to a vehicle vs. pedestrian crash in the area of 12th Avenue and Hawthorne Street.

Police Chief Jeff Lynn said the toddler was in a jogging stroller being pushed by her mother, southbound on 12th Avenue at Hawthorne Street.

The vehicle was stopped at the intersection of Hawthorne Street and 12th Avenue, preparing to turn north onto 12th as...