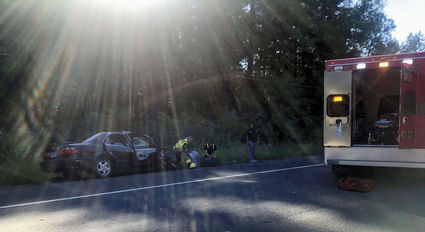 MEDICS assist a victim next to a Honda Accord that was involved in the collision.

Multiple people were injured, including a 7-year-old girl who was taken by Life Flight to a hospital, in a two-vehicle crash on Highway 20 west of Sweet Home Sunday afternoon, June 21.

According to an Oregon State Police report, a blue Ford minivan pulled out in front of a black Honda Accord, which T-boned the van.

The police report did not specify which side of the highway the van pulled out from – both Liberty and Fairview roads intersect the highway at that point. But the wreckage was...