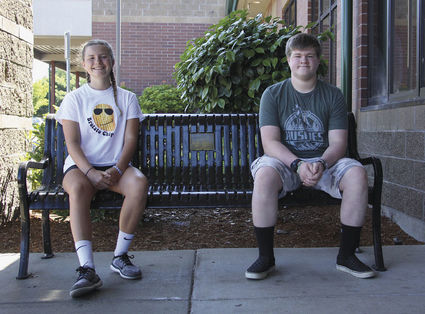 FRESHMEN of the Year for 2019-20 are Brookelynn Burke and Christian Dominy.

Despite an unusual and short-lived introduction to Sweet Home High School, Christian Dominy and Brookelyn Burke still managed to bring home the coveted Freshman Boy and Girl of the Year award for 2019-20.

Burke, 14, is the daughter of Aaron and Amy Burke. She has two brothers, Dylan Richards, 22, and Jaxson Burke, 9.

Dominy, 14, is the son of Clifford and Katie Dominy. He has 10-year-old twin sisters, Sydney and Ellie.

Burke had her eyes set on obtaining the award since she first heard about it near the end of her eighth grade year.

She described herself as someone with a "hard-work ethic" and "high goals," who has strived since sixth grade to maintain a 4.00. Burke said her peers often tease her about how driven she is, saying, "Oh Brooke, you're going too hard."

But when she saw Carsen Perry and Zoey Opperman win Freshmen of the Year for 2018-19, she knew she "could achieve that."

"It was the only thing on my mind" for a while afterwards, Burke said. By the time she'd finished half of her freshman year, she remembers feeling antsy for the nominations to begin.

Once she earned one of the six nominations for the girls' award, Burke believed she had a solid chance of winning because of her extracurriculars and volunteer work. She checked her email every day after she submitted her application, feeling "nervous." At one point, she emailed the school to check in about the award, but when she didn't receive a reply, she thought she had lost.

She learned the truth while cleaning her room one day. Burke remembers her mother walked in and said, "Brookie, I have some news."

"I immediately started crying," said Burke, once her mom told her, adding that they were "tears of joy."

Dominy said he initially felt "shocked" after he discovered he had won the award.

"I thought other people would get it because so many other people are more well-known than me," Dominy said, citing fellow nominee Evan Towry as an example.

Dominy thought the teachers voted for him because he "tried to stay on top of" his grades and "always talked to teachers" to see how he could raise them if they were starting to slip. He also discussed his behavior in the classroom, saying he "just wanted to get the day done with no problems" and "didn't talk in class." Like Burke, Dominy earned a 4.00 his freshman year and wants to continue his streak throughout high school.

Additionally, Dominy said he's had an "impact" on several teachers at the school, especially language arts teacher Tomas Rosa. After Dominy asked if the class could salute the flag on 9/11, Rosa sent an email to Dominy's parents, praising him for being one of the only students to make the request that day.

According to Rosa, "not many kids these days appreciate what went on that day and how many lives were lost," said Dominy.

Dominy hasn't always found success and recognition in the classroom, however.

"In my grade school years, I wasn't the best kid," he said, but his "life turned around" after his parents told him his "life would be easier" and he'd have a better chance of getting into a good college if he improved his grades.

"This year, I proved my parents wrong that I could do it alone," Dominy said.

Burke also credited her parents for being instrumental in her academic achievements. She described them both as hard workers, and lauded her mom for taking care of two young kids while also working full-time. Despite a busy schedule, Burke's mom attended her games and even helped coach her in the past.

"They've always been there for me is the main thing," said Burke.

Outside of the classroom, Burke played an integral role on the varsity girls basketball team, was penciled in as a swing player in softball, participated in high school leadership, and volunteered at Giving Tree this year. She's currently learning to play soccer, a sport she has never played before. Other hobbies include riding horses and bikes, making bracelets, going for walks with her mom, and overall, just being outdoors.

Before graduating, Burke said she wants to be valedictorian, help the girls basketball team make it to the playoffs, and get recruited to play basketball in college. She's also chasing after another prize: the Junior First Citizen award, which fellow athletes Nich James and Megan Hager received earlier this school year.

Burke's "dream" is to play basketball for University of Oregon because the women's team is currently the best in the country and has an "amazing" coach who helped build them from the bottom up. While she doesn't know what she wants to do for a career yet, Burke said she's narrowed it down to five options: forester, dental hygienist, surgeon, physical therapist and chiropractor. Right now, she's leaning towards being a chiropractor.

This year, Dominy played football and trumpet for the school's band. He planned to join the baseball team this year before the COVID-19 shutdown, and he hopes to play soccer as a sophomore if possible. He also sings for his church, attends youth group every Sunday with his cousins, and enjoys camping with his family. He hopes to graduate with a 4.00.

Regarding his plans after graduation, "I haven't really thought far into the future yet," he said.

Still, while he doesn't have a "dream career," he "definitely" wants to play sports in college and said he's interested in attending Boise Bible College in Idaho, which he heard about through a Christian summer camp. 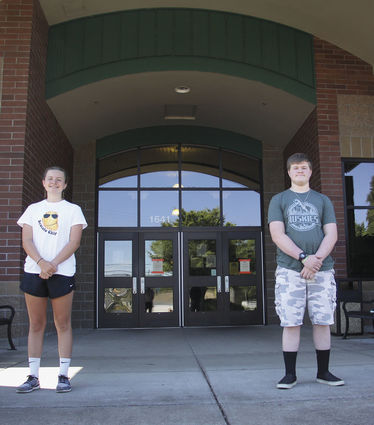