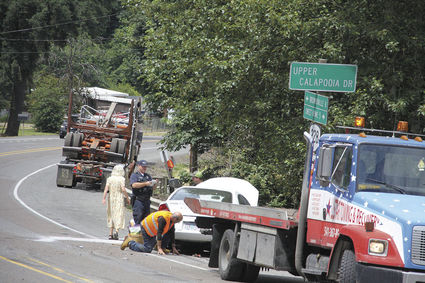 Rescue workers assist at the scene of a collision between a log truck and a car Thursday morning, July 9, at the intersection of Highway 228 and Upper Calapooia Drive. According to an Oregon State Police report, a Dodge sedan, driven by Annie Regina Kruit, 63, of Veneta, headed south on Highway 228 was slowing to a stop behind a vehicle that was preparing to make a left turn onto Upper Calapooia. A log truck driven by Anthony M. Thompson, 28, of Shelton, Wash., was following the Dodge and was unable to stop in time. According to police, Thompson tried to swerve to the left to avoid the car, but crashed into the side of the Dodge. Thompson suffered minor injuries, police said. Both vehicles were towed from the scene, where traffic was blocked for about 45 minutes. Police said Thompson was cited for following too closely.