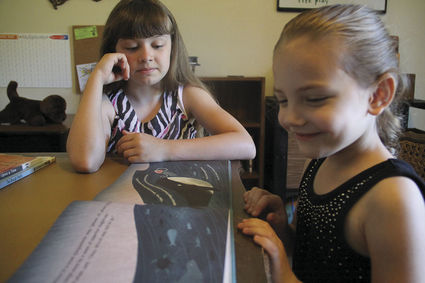 SISTERS Fawna, 8, and Freya, 4, Foxx read a library book together. It's a "Vox" book, which plays audio of the book as she reads it.

Summer's just not the same when there's a pandemic going on, but Sweet Home Public Library is trying to make the best of a tough situation.

It started when the library closed and staffers scrambled to get books to patrons. Library Director Rose Peda noted they started a drive-thru library option, so residents could call in their book orders. "We would just put the items in a bag for them and they would just drive up and off they would go," Peda said.

But the library does a lot more than lending out books, and one of the toughest losses for local families has been the weekly learning activities the library typically puts on every summer in its Summer Reading Program.

Though the library has re-opened, that usual version of the reading program, featuring weekly group activities, is still on hiatus because of the pandemic.

"We do miss it," Peda said. "It's fun for us to see the kids and to watch the enjoyment on their faces, to see them learning and interacting."

She recalled a particularly sweet interaction between then-12-year-old violinist Moriah Winn and her audience of youngsters several years ago.

"They asked her to play a song, and she said, 'I don't know that song. But if you sing it, I can play along with you,'" Peda said.

The talented young performer is able to play by ear, and "they were singing and she started to play along with them," Peda said. "And because she's a child, I think they related really, really well to her."

Losing the in-person interaction has been really tough for parents like Cassie Foxx.

"We would mingle with the other families and it was kind of like school for the young ones," Foxx said. "My kids really miss going to the library."

Foxx has two daughters: 8-year-old Sawna and 4-year-old Freya. Freya isn't in school yet, so Foxx used to bring her to the library twice a week "just to give her an outing."

"She loved it, and when they closed she was devastated."

Library Assistant Joy Kistner said the reading program had become multi-generational before the pandemic. "The seniors from the Senior Center would come and join us, because we'd put a poster over there saying this is who's going to be here Wednesday morning after your aerobics class."

"We do miss the interaction with our patrons," Kristner added.

But the summer reading program lives on.

This summer, the library is mailing books to children at no cost, along with themed activity kits. Last month's book was "Roots, Shoots, Buckets & Boots: Gardening Together with Children."

The librarians mailed the book alongside an activity packet that included seeds and soil.

"It had pumpkin seeds, and she was like 'What! You can plant pumpkins?"

Funding for the socially distanced reading program comes from a $1,453 state library grant, a $300 donation from the Sweet Home Elks Lodge, and a $500 donation from Comcast. The local Friends of the Library have covered approximately $1,000 in additional costs.

The next book giveaway for the reading program is divided by age, with the youngsters getting a Cat in the Hat book called "Oh Say, Can You Say Di-no-saur?: All About Dinosaurs."

Along with the book, the librarians are including a dinosaur puzzle.

Older kids will get a more science-oriented book and kit. Books are being mailed this week to children around the city, and families can pick up the activity kits at the library.

For Foxx, it's a relief to give her daughters another taste of library life. "It's been nice. Freya's eyes lit up when she saw it was a package from the library," she said.

There'll be one last package available for kids in August, but Peda said a big part of the program is about drawing kids to the library. "This way we think will encourage more children and parents possibly to come to the library again and to check out materials and more books," she said.

There are also little free libraries and pop-up libraries around town where children from kindergarteners to teenagers can grab books to take home. They're at each of the elementary schools, Crawfordsville Market, and the Boys and Girls club. 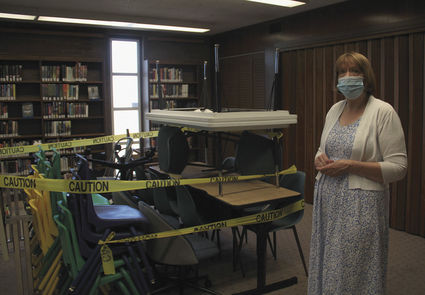 Library Director Rose Peda stands beside a cordoned-off pile of new furniture for the library. It will be set out for use after the pandemic.

"Statistics show that if a child chooses a book by themselves for themselves to read, there's an 80 percent likelihood that they will read it rather than an adult handing them a book," Peda said, so it's worthwhile to give children their own choice when it comes to reading.

A grant through the Institute of Museum and Library Science provided $2,992 to buy books to give away. Some of the funds even went to comic books, which help kids "get back in the habit of reading," Peda said.

One little boy at the Crawfordsville little library was apparently disappointed by the options because of the lack of dinosaur books, so the librarians have started to specifically stock them for him, Peda said.

Peda said reading a physical book can help reduce screen time for kids who are stuck with screens for socializing and schooling alike.